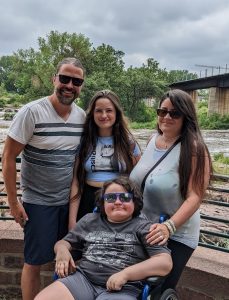 In February 2021, TheBurg published a story about the Gunther family’s journey to find a cure for their now 10-year-old son Drew.

Drew was diagnosed with Duchenne Muscular Dystrophy (DMD), a fatal genetic disorder, at age 7, when his pediatrician noticed that he moved slowly and lacked coordination. DMD is found primarily in boys and affects about 1 of every 3,500 children.

Upon receiving this diagnosis, his parents started the foundation, Wishes for Drew, and moved the family from their home in Harrisburg into an RV to drive across the country so Drew could receive stem cell treatment in California.

While in California, the Gunthers lived off the grid in their RV, relying only on generator and solar power. They traveled over 15,000 miles in under a year, traversed the country three times, survived wind storms, scorpion stings, and wild dog and scorpion chases.

Now, a year and a half later, the Gunthers have moved back to Harrisburg, leaving California in March 2021. Drew continues to receive treatment, just closer to home now.

“Treatment was doing pretty well for a while,” said Drew’s dad Steve. “The last couple of rounds haven’t been effective for Drew, so he’s pretty much almost entirely in a wheelchair.”

But the Gunther family is not alone in this fight. Drew started receiving treatment in Pennsylvania with a family friend from Ireland whose son also has DMD. Together, they started “Project Care for the Rare” to support a group of about 20 families from around the world with sons affected by the disorder.

“They’re just trying to seek out something that would work for their boys,” Steve said. “They’re in the same boat as us. They were all told the same thing as us–there is no hope and there is nothing that can be done.”

The parents eventually found treatment in Colombia that is “promising to be superior” than the treatment the boys are getting in the United States, Steve said. The Gunthers and the other 19 families made arrangements for several trips to that South American country. The first is set for the end of July.

Because Drew’s disease is so rare and most of his treatment is experimental, none of his medical bills are covered by insurance. Everything is paid for out-of-pocket by the Gunther family.

That’s why they started their nonprofit organization, Wishes for Drew.

Steve said that local small businesses have always been Wishes for Drew’s biggest supporters. That’s why it’s important to him that their foundation works with these businesses, especially in a post-COVID world. It’s a “community cycle,” Steve explained, where they can help small businesses and small businesses can help them.

Drew’s mom, Vanessa, also makes jewelry to raise money for Drew’s treatment. She uses items like sea glass, guitar strings and wood to make her items, some using specific colors to represent DMD, healing and other rare diseases. Vanessa travels to farmers markets and summer bazaars to sell her jewelry and also sells it on the Wishes for Drew website.

The organization’s purpose is not only to raise funds for Drew’s treatment, but to raise awareness about DMD. The group has held fundraisers, such as “Pint Nights” at local breweries and kayak fundraisers down Swatara Creek. This year, they’re trying to get a team of 20 to 25 people to run the Harrisburg Marathon as a relay, which would make them the largest charity organization represented.

“We’re hoping to become a presence out there and raise awareness,” Steve said. “We want to make people wonder what this group is running for. We can’t expect people to understand a disease that is rare and that people have never heard of. It’s kind of our job to make sure people hear about it because it can affect anyone.”

To find out more about Wishes For Drew, visit their website.