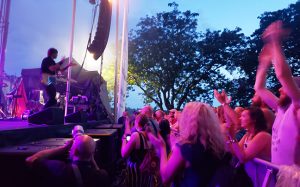 Death Cab for Cutie at Riverfront Park in June 2019

Frank Schofield predicted what it’ll be like when concerts return to the Harrisburg area—like the end of Prohibition.

“I think demand is going to be off the hook,” said Schofield, the director of live entertainment and media services at Harrisburg University.

In June 2019, HU Presents hosted a major band, Death Cab for Cutie, in Riverfront Park, with plans for more big shows to follow. But then COVID-19 hit, forcing it to scrub its entire slate of 2020 concerts.

Almost two years later, the school is back with rock and alternative bands lined up for late this summer.

“The industry has been roaring to get back,” Schofield said. “We haven’t been able to do what we do.”

The sentiment was shared across the board with Harrisburg-area music venues that are preparing for a spring and summer that include live shows, unlike the last.

HU decided to follow the lead of other music venues and festivals around the country, opting to schedule shows for August and September. Jason Isbell and the 400 Unit, Cage the Elephant, Dawes and Portugal. The Man are slated to perform at Riverfront Park. HU also plans to have shows throughout the fall, Schofield said.

“We had a great run right before the pandemic, and we are ready to pick up where we left off,” he said.

Harrisburg Midtown Arts Center (HMAC) is kicking things back into gear, as well.

The restaurant and venue reopened on April 8, starting with smaller shows for the spring and summer. General Manager Kevyn Knox said that they plan to soon hold karaoke and open mic events—a crowd favorite. Large concerts are still on hold, Knox said.

XL Live, a larger concert venue in Harrisburg is preparing for shows this weekend, featuring bands Defiant, Suicide Puppets, Lasciate and UltraViolent. They are requiring mask-wearing and limiting capacity, according to their website.

For those looking for a more intimate music experience, The Englewood in Hershey already has live shows happening most weekends. On Fridays, they have dinner shows and sometimes a late show, as well as occasional Saturday performances and regular Sunday jazz brunches.

All of their shows are seated and socially distanced, Creative Director Ang Moramarco said. Shows are not ticketed, but seats are reserved through regular dinner reservations.

The Englewood opened in July 2020, in the midst of the pandemic, which created challenges, but Moramarco said that the venue’s large rooms made abiding by CDC guidelines more feasible.

She said they also plan to hold some larger ticketed shows by the end of the year in partnership with HU Presents.

“People miss that experience, that energy,” she said. “We are excited to bring that back.

The Englewood is located at 1219 Research Blvd., Hummelstown. To view their lineup pf events, visit their website.

XL Live is located at 801 S. 10th St., Harrisburg. To see a list of shows and purchase tickets, visit their website.