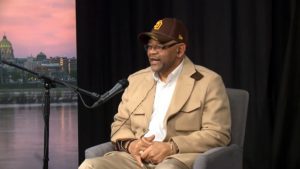 Aaron Johnson didn’t have a glamorous job, not the kind of career you’d think of for someone whose name is easily one of the most known around Harrisburg.

As the director of the Public Works Department, Johnson dealt with a lot of trash and saw some of the messiest parts of the capital city. But, as Johnson discussed his career on the city’s Facebook Live retirement celebration on Friday, it was clear he left an impact.

Johnson, who was born and raised in Harrisburg, began working at the city’s incinerator in 1996 before moving to the highway department, supervising maintenance and events at City Island and eventually landing in public works

He was a hard worker, which he attributed to his time serving in the military. As a kid, he confessed, he wasn’t always that way.

“The military was the best thing that could’ve happened to me because it changed my whole outlook on life,” he said.

In 2010, Johnson became the deputy director of the department, just as the city collapsed financially. The public works department was on the brink of shutting down, and morale was at an “all time low,” said Mayor Eric Papenfuse during the online event.

Wanting to see change, Johnson ran a write-in campaign for mayor of Harrisburg.

“If I thought I could turn the city around,” he said. “I was going to do what I needed to do.”

Johnson lost to Papenfuse, but continued to make a difference in the city, leading the public works department when, he said, he didn’t see many other Black men in managerial positions in the city.

“I said, if I got in management, I’d be able to sit at the table and make difference,” Johnson said. “If you’re on the sidelines, you can’t make changes.”

Under the Papenfuse administration, Johnson became the public works director and successfully transformed the department into a moneymaker for Harrisburg. Most recently, he helped bring Steelton, Paxtang and Penbrook onto Harrisburg’s trash pick-up route.

“We came a mighty long way,” Johnson said. “Our guys are really resilient, and they get it done. We are leading by example.”

During his time as director, Johnson trained Dave West, who will now take on the role of director.

“Thank you for choosing me,” West said. “I’m not going to let you down.”

Over his years in Harrisburg, Johnson was also heavily involved in Little League Baseball. He coached and mentored local youth through the Men of the South East League Field Inc. (MOSELF), a chapter of MLB’s Reviving Baseball in Inner Cities (RBI) program. Johnson also helped restore baseball fields in the city.

“All we did was give back to those young kids what was given to us,” he said.

This past year wasn’t easy for Johnson’s family. Both he and his wife tested positive for COVID-19, and a few of his friends and family members passed away from the virus.

Although his last year as director was a hard one, Johnson looked back on his career with fondness. During the Facebook Live broadcast on Friday, various friends, co-workers and family members shared stories about Johnson. Even his mom, Barbara Chester Johnson, appeared virtually to wish him well.

“You’ve worked all your life and now it’s your turn,” she said. “All I can say is a job well done.”