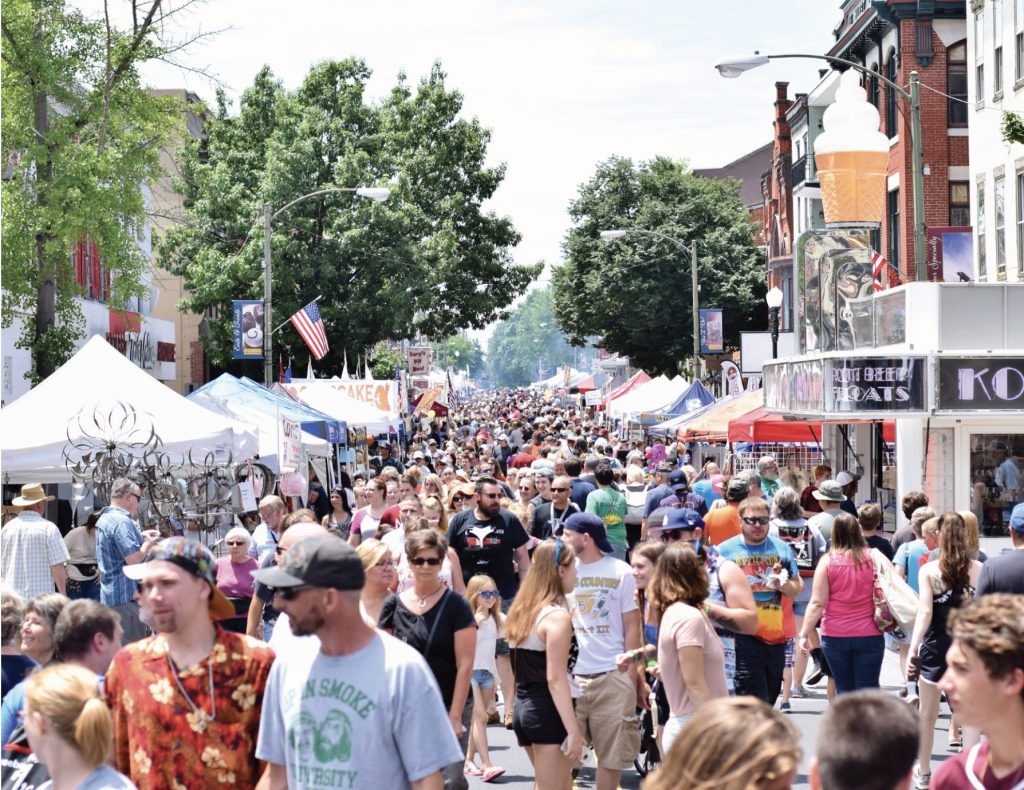 Images courtesy of Jeff Palm and Mechanicsburg Chamber of Commerce.

After a two-year hiatus, one of the West Shore’s most-loved annual events is set to return this month.

On June 16, Jubilee Day, known as the East Coast’s “largest, longest running one-day street fair,” will take place for the 92nd year in the heart of downtown Mechanicsburg. It was last held in 2019 then halted due to the pandemic.

“There’s anticipation around town now that we’re doing something that resembles what we’ve always known as Jubilee Day,” said Jeff Palm, executive director of Mechanicsburg Chamber of Commerce, which sponsors the event.

“It may not look like it did in 2019, but it will be something that’s familiar and will give everyone a respite,” he said. “The world has changed in the three years since we last held it. It’s a stretch for some companies now with personnel shortages.”

Nonetheless, Palm said that he expects this year’s event will feature at least “a couple of hundred vendors” offering food, games, arts and crafts, business information, retail products, carnival rides and more. Past Jubilee Days have attracted as many as 70,000 attendees.

Palm said that the “whole area” benefits from Jubilee Day, not just the day-of participants.

“Jubilee Day is a chance for our local businesses to promote,” he said.

The first Jubilee Day took place in 1924. Mechanicsburg Mayor Jack Ritter, who was born in 1936, remembers going as a small child to the annual event then known as “Farmers’ and Merchants’ Day.”

“As a kid, I was excited to smell all the food there and to see all the new cars and farm equipment,” Ritter recalled recently.

In those days, the festival’s span was limited to Main Street from High to Arch streets, though it was halted for several years in the 1940s due to World War II.

“Back then, there were a lot of street vendors and picnic food,” Ritter said. “The car dealers all had their new cars on display, and the local farmers corralled their cows, pigs, sheep and whatever for display. Farmers also had their fruits and vegetables set up for sale all along the street.”

Ritter, a former third-generation owner of Ritter’s Tru-Value Hardware on Mechanicsburg’s Main Street, remembers his father, William R. Ritter, setting up Frigidaire appliances for display outside the store. As a teen, Ritter ran chainsaws for sale outside the business.

Today, Ritter said that he enjoys bringing his grandkids to Jubilee Day, where “they get to run all around.”

“I use that day as a proclamation that calories don’t count,” he quipped. “I enjoy the smells of the crab cakes, pancakes and funnel cakes. People get to see their friends and neighbors there, too.”

Jim Schmick is a downtown Mechanicsburg merchant who sets up a sidewalk sale outside of his business, Civil War and More, on Jubilee Day. He’s done so for most of the 21 years his shop has been in business on S. Market Street.

“Jubilee Day needed to come back,” said Schmick of East Pennsboro Township. “It’s always been an annual tradition for our family to bring the kids to Jubilee Day.”

Schmick said that he’s seen people “from all over the U.S.” peruse his sales on Jubilee Day. His shop specializes in Civil War books, videos, prints, ephemera and music, particularly focusing on area milestones that led to the Battle of Gettysburg.

For a 15th year, Palm is overseeing the event planning. He said that he starts planning right after the prior year’s event concludes.

For Palm, the biggest challenge involves logistics or “getting things in place,” such as arrangements for portable restrooms, visitor shuttle service, vendor placements, trash receptacles and so forth. In short, his goal is to provide “a safe and enjoyable time” for all.

“I still had color in my hair when I first started doing this,” he joked.