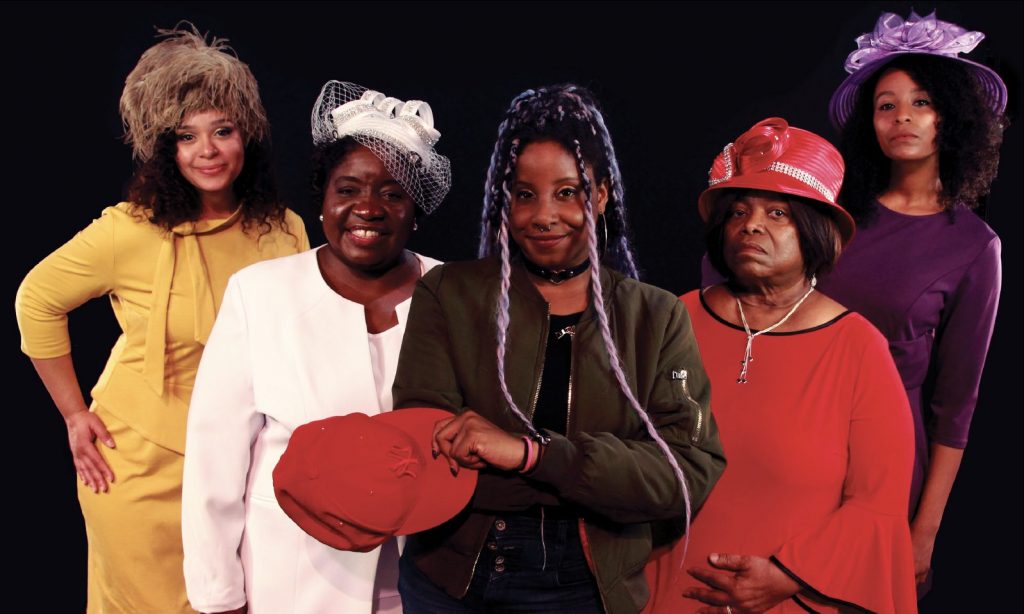 The cast of “Crowns”

Got shot one day

Ma sent me away

To open the door

To let the light in

On a brand-new day

To consider my sins

To open my eyes

When “Crowns” was produced in Harrisburg for the first time in 2006, audiences were blown away.

Here was a musical that mixed gospel music, movement and dance, and a deeply moving and relevant story that centered on Black culture and a uniquely Black journey. The show was so popular it warranted a remount the following year, which brought back the cast to celebrate another successful run.

One of those cast members was Sharia Benn, now the president and executive artistic director of Sankofa African American Theatre Company, a performance and education-based theater company that has brought to life such productions as “Echoes of Voices of the Eighth,” “Pretty Fire,” “for colored girls…” and “Akeelah and the Bee.”

Now, Benn takes the helm as director and producer of “Crowns” and is tasked with bringing it back to Open Stage where it made its Harrisburg premiere 16 years ago. When asked about her memories of the previous production, Benn recalled her time on stage fondly.

“I remember having moved to Harrisburg. I had a feeling that I had come home—a theater space where there were other Black theater actors. I still have connections with other cast members. We turned into a family.”

At the beginning of “Crowns,” we meet Yolanda, a lost, young Brooklynite who serves as our guide. Yolanda has been sent to live with her grandmother (known to her community as “Mother Shaw”) after her brother is the victim of gun violence. The other characters—largely women of her grandmother’s church congregation—serve as touch points to Yolanda and as spiritual advisors on her search for meaning and mooring. Their stories center on the experience of Black women finding their place in the world using vignettes on marriage, death, love, family and, of course, life in the church.

This brings us to the title of the play, “Crowns.” Author Regina Taylor was inspired by a book of the same name by Michael Cunningham and Craig Marberry: “Crowns: Portraits of Black Women in Church.” Elegant, flamboyant, bright and big, hats of all shapes and sizes have been a part of life in the church, and accompanying those accessories is the all-important “hattitude.”

“So hattitude,” according to Benn, “is the strength, the foundation, that a woman has to have before she puts a hat on her head. It takes a confidence that these ‘Hat Queens’ have to have before they walk into church. Because eyes will be on you.”

“Hattitude is a fierceness. It is owning the strength of who you are.”

Although it is called a “gospel musical” (and many will recognize songs such as “His Eye Is on the Sparrow” and “Wade in the Water”), the show is an electric mixture of gospel, rap, jazz and African beats.

“The music guides it,” Benn said. “The origin of gospel music literally goes back to the origins of African traditions. The flow of the African drumbeats and rhythms to slave call and response to jazz to what we’ve come to know as modern gospel.”

Benn believes that every person in the audience will be able to connect with the celebration that is prominent in “Crowns” and the “foot-tapping, hand-clapping, soul-stirring music” that accompanies the story.

“It’s true to who we are,” Benn said. “Our history. Our culture. It centers and uplifts Blackness in a way that is inclusive—regardless of race or gender.”

While audiences can expect soaring songs, bright lights and costumes—and stellar performances showcasing talent from the central Pennsylvania region—they can also expect a very familiar and human story, one that will serve as medicine for the community.

“‘Crowns’” is “a place of refuge and joy,” Benn said, believing that it was important to bring the show back for Harrisburg audiences. “This is the perfect show to do about healing. It is joyous. Let’s have some joy. Let’s have some beauty against the backdrop of COVID.”

“Everybody in Harrisburg will connect with these stories,” she said. “This play communicates, ‘I get you. I’ve been there. You can get through this.’”

“Crowns” runs May 28 through June 26 at Open Stage, 25 N. Court St., Harrisburg. Tickets can be purchased at www.openstagehbg.com or at the box office.

Doors and bar open 45 minutes prior to the performance.