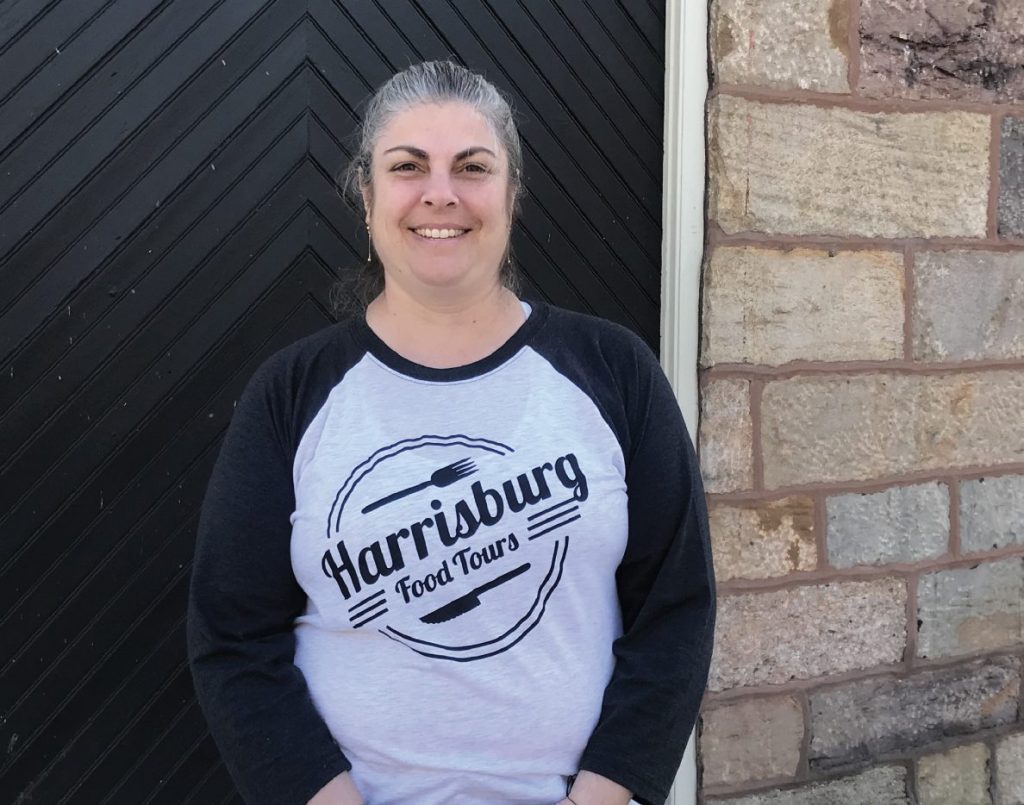 It was the first time that Kristi Woodburn of Ephrata had ever stepped foot inside Harrisburg’s Broad Street Market.

“I love how all the stands have international flavors,” Woodburn said, her eyes wide, taking in the sights, sounds and scents.

Another first-time market-goer, Maria Angelo of Hummelstown, sampled six vendors’ specialties. From appetizers to beverages, several main dishes and dessert, it was all part of a food tour—each tasty morsel served up with accompanying stories about culture intertwined with cuisine, small business success, sprinkled with Harrisburg history.

While food tours are well-established in many American cities, Harrisburg Food Tours appears to be the first in Pennsylvania’s capital city.

“What an awesome thing for Harrisburg—a way to celebrate the diversity of cultures,” Angelo said. “And as a tour guide, Nada has a casual, welcoming style—she becomes your friend.”

Walton, 45, of Harrisburg, guides guests like Angelo and Woodburn through the market, as well as Midtown restaurants, pointing out the city’s architectural gems along the way, even taking time for a stroll along—and offering info about—the Susquehanna River. The walking route connects the dots between city eateries, and it feels good to move in between both sweet and savory samples.

“I chose to start and end tours at the Broad Street Market because the market is not only about the food,” Walton said. “It’s a gathering place, plus there’s lots of history and culture.”

Walton dreamed of creating Harrisburg Food Tours for three years while she did her homework—noshing and note-taking through other city food tours, from Gettysburg to New Orleans, plus attending classes at Chicago’s Food Tour Pros.

The pandemic slowed her momentum and shifted tour operations. There were occasional private tours—which many restaurant partners appreciated—with guests’ comfort levels dictating whether tours entered restaurants or stayed outside to munch on samples. Some of Harrisburg Food Tours’ original partners closed amid the pandemic—the market’s Phyllo and Pikowski’s Pierogi Place, for example. So, Walton had to pivot, change course and continue forging relationships.

“It’s almost like I’m starting over,” she said. “But as restaurants and businesses started opening back up, 2020 into 2021, even now, people like being able to get out and do something, because a lot of the tour is walking outside.”

“I love the idea of food tours and sharing the stories behind food,” said Jennie O’Neill, owner of Knead and the first to partner with Harrisburg Food Tours. “I think it adds so much to our community.”

Even though tour-goers have likely had pizza a million times, their taste buds are usually surprised by O’Neill’s unique pies, including the “Baby Badger,” a Brazilian-style pizza with hot, spicy-sweet honey. And food tour samples usually bring them back as customers, O’Neill said, no matter where they’re from.

“I think food tours are an opportunity to demystify Harrisburg,” O’Neill said. “Sometimes, there are barriers put in your way when you live in a more suburban or rural place, but the food tour provides accessibility to our city that Nada is guiding you through.”

Walton’s life experiences seem to have prepared her for this role. She’s lived in five countries and several U.S. states, has traveled extensively around the globe, and speaks five languages. Her childhood was spent in Saudi Arabia, then Canada, with parents both born in Palestine. Her half-Russian, half-Lebanese mother instilled the importance of hospitality in her.

“I grew up with a mother who wanted to feed everybody,” Walton said. “Culturally, that’s what we did.”

With a zest for travel, one of Walton’s first jobs was teaching English in South Korea. Marriage to her Army officer husband, Lawrence, took her across the United States and across the pond to England—including a stop at Ft. Indiantown Gap.

“We had a house in Harrisburg from 2006 to 2008, and when Lawrence retired from the Army in 2016, we chose to move back here because Harrisburg has everything you could need in a city—parks, sports, concerts, theaters, less traffic than other cities and definitely good food. So, we didn’t see the need to live anywhere else,” Walton said.

Restaurateurs like O’Neill are grateful that Walton put her roots down here—and planted Harrisburg Food Tours.

“Nada’s love of sharing food—it’s what food is all about, and it’s what we in the restaurant industry do,” O’Neill said. “We want to bring people together over food.”

Like good recipes, Harrisburg Food Tours seems to combine all the right ingredients.

“Having a food tour business in the city of Harrisburg allows me to bring people into the city to eat in places they might not otherwise know about,” Walton said. “Food brings people together, and food creates memories.”