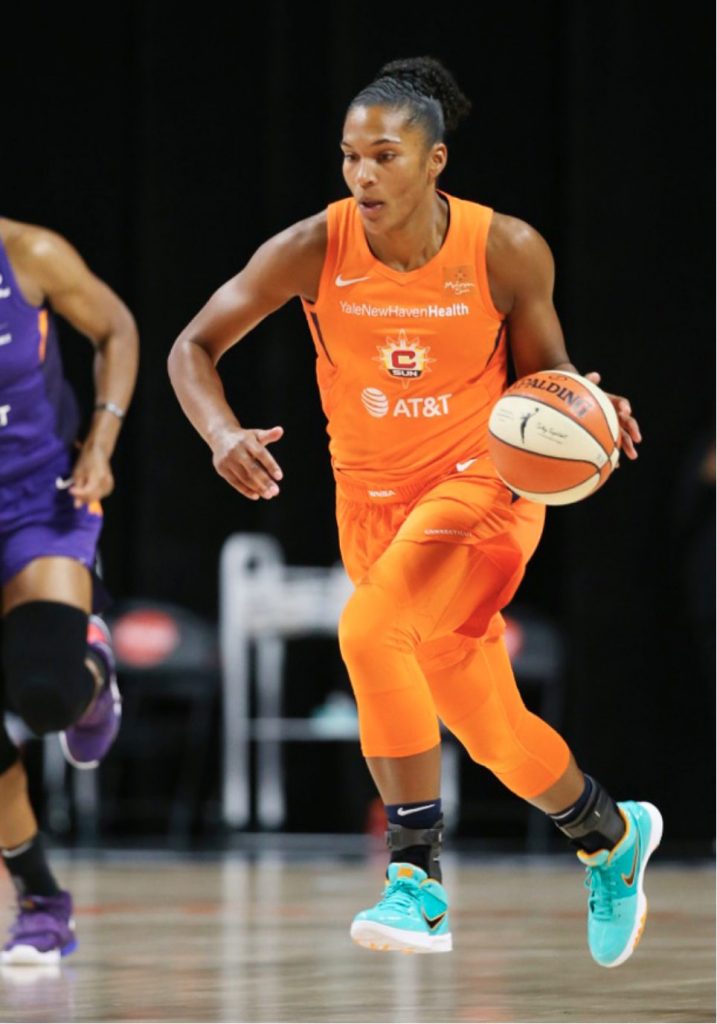 Focused and competitive on the court. Personable and laid-back off it.

While she may have two totally different personas, Alyssa Thomas is still the same person as when she was growing up in Harrisburg.

Now, Harrisburg hasn’t produced all that many female professional athletes. So that might make Thomas something of a role model, a person to look up to.

But because Thomas has always remained true to herself, she has never taken her fame too seriously. Her Harrisburg roots and upbringing have kept her grounded and even-keeled.

“Anybody who knows me, knows I’ve never changed,” Thomas said. “I’m the same person I was in high school. I’m a down-to-earth, normal person. I like doing things like hanging out with my friends and watching movies, just like everybody else.”

A 2010 graduate of Central Dauphin High School, Thomas is one of the top players in the WNBA. When the 2021 season unfolds early this summer, it will mark Thomas’ eighth season with the Connecticut Sun.

“Most people who have watched me play know I’m a high-energy player on the court,” she said. “I want to win. But I’m quiet and shy off the court. I have a small group of close friends. I’m not really a complex person.”

As a person and a WNBA player, Thomas is in a really good place in her career. At 28, she’s experienced beyond her years, but she’s also at the top of her game physically.

Because of her durability and flexibility, Thomas has been slowly, but surely creeping up Connecticut’s all-time scoring, games played and assist lists. She’s currently fifth in all of those categories in franchise history, but more importantly, she has helped transform the Sun into a consistent playoff team and a perennial WNBA championship contender.

Being in one’s prime certainly doesn’t come without its perks.

“At this point of my career, I would definitely consider myself a veteran,” Thomas said. “I’ve been with Connecticut for my whole career. When I was first drafted, the team wasn’t doing so well. Since then, we’ve made a huge turnaround. I just try to help the team in any way I can.”

An explosive, athletic forward, the 6-foot-2 Thomas, who owns a career scoring average of nearly 12 points a game, has displayed steady improvement throughout her time with the Sun. A two-time all-star, she was selected to the WNBA’s all-defensive first team for the first time during last year’s COVID-19-shortened campaign.

“I think there’s always room for improvement,” she said. “But I’ve established myself in this league. I pride myself on what I bring to the floor, and I pride myself on defense. For me, right now, it’s about getting a championship. I still have a lot more to do.”

A fan favorite in Connecticut, Thomas is known as the Sun’s “engine” for the energy she brings to the team. At home games, delighted Sun fans are treated to engine sounds over the public address system, whenever Thomas scores.

“I’m a captain and the team’s longest tenured player,” Thomas said. “I just want to come out each and every night and set the tone for the team, both defensively and offensively. I’m not always a vocal leader, but I do speak up when I see things. For me, it’s about giving 100 percent every time I step out on the court.”

Following a spectacular scholastic career at Central Dauphin, Thomas matriculated to Maryland, where she became the Terrapin’s all-time leading scorer, among both women and men.

Three times during her college career, she was named the Atlantic Coast Conference’s “Player of the Year.”

“Growing up, I played basketball for fun,” said Thomas, who majored in family science at Maryland. “It’s something I’ve always enjoyed doing. During my career, I’ve always been able to take my game to the next level, and now I’m playing at the highest level.”

Being a professional has provided female athletes like Thomas a platform and a voice to further social causes that are near and dear to their hearts.

“Basketball has opened so many doors for me,” she said. “I think a lot of girls do look up to me, but it all starts with hard work. The cool thing about the WNBA is that it’s such a diverse league. We stand for so much, and we’ve been standing up for those causes for a long time.”

During her playing days at Central Dauphin, Thomas led the Rams to the 2008 PIAA Class AAAA championship as a sophomore. The Rams’ all-time leading scorer, Thomas was honored as Pennsylvania’s AAAA player of the year in 2010.

“I get to Harrisburg here and there, because most of the time I’m playing basketball,” said Thomas, who also plays professionally overseas during the WNBA’s off-season. “I don’t have much down time. When I was growing up, I was always outside playing basketball at Brightbill Park (in Lower Paxton Township). Some of my great friends from high school were able to go on and do great things. But it’s something I’ll never forget.”

As she’s grown and matured, Thomas has drawn from that local upbringing, and it has served her well. In many ways, Thomas is the person and player she is today because of a childhood spent in Harrisburg.

“My parents (Bobby Thomas, Tina Klotzbeecher-Thomas) have made me work for everything,” Thomas said. “They never handed me anything. Even playing board games as a kid, I had to win for real. My parents always taught me to be humble and respectful. A lot of how I am now started in Harrisburg.”

Because you can’t accomplish the things that Thomas has without knowing exactly who you are.

Heart in Harrisburg: As Dennis Green achieved greatness, he took his hometown with him