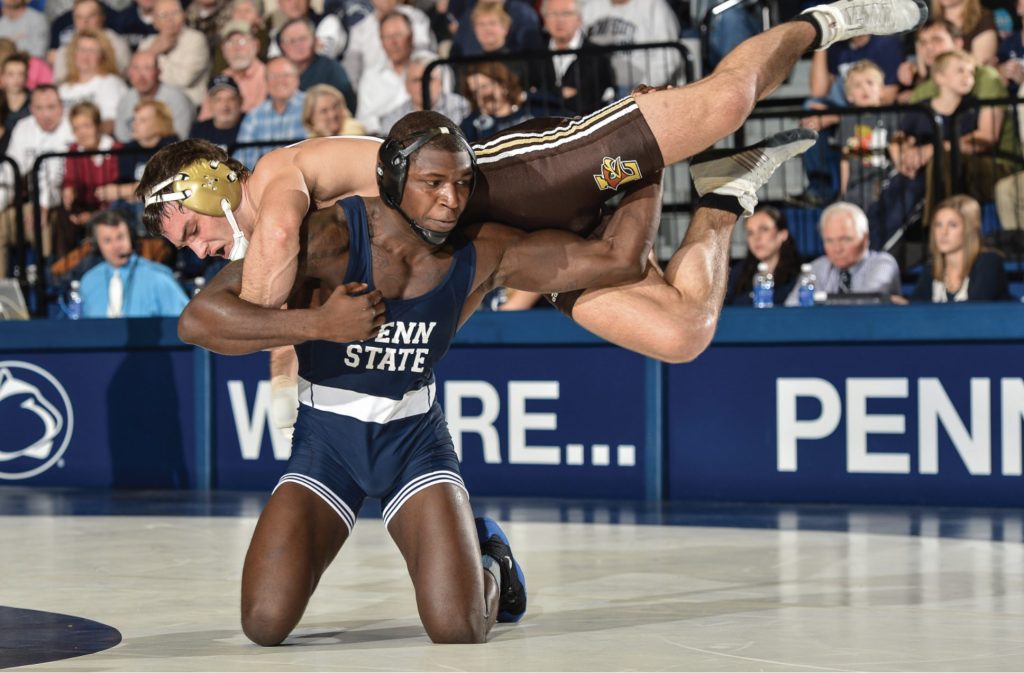 When the boys with cauliflower ears sprout up around town, it can mean only one thing—it’s high school wrestling championship season.

Central Pennsylvania has long been a breeding ground for high school wrestling, with District III fielding strong representation in the state tournament each year. Many wrestlers have gone on to heralded college careers, including Harrisburg High’s Phil Davis and former Susquehanna Township High star Ed Ruth, both of whom won national championships at Penn State—Ruth three times.

A newer phenomenon, however, is that wrestlers now have a way to parlay that wrestling success into longer careers. Both Davis and Ruth have enjoyed success as Mixed Martial Arts (MMA) fighters. At 37, Davis remains an active fighter, while Ruth, 31, is taking a hiatus to coach wrestlers as a University of Illinois assistant after first training Olympic wrestling hopefuls at a regional training center in North Carolina.

“District III and all of the greater Harrisburg area is such a hotbed for Pennsylvania wrestling,” said Greg Goldthorp, athletic director at Central Dauphin East and PIAA District III wrestling co-chair. “Pennsylvania is the top state in the nation for wrestling. So, it doesn’t surprise me that many move on to the MMA world and make a name for themselves.”

Mixed Martial Arts is exactly what its name implies—a combination of boxing, grappling, kickboxing, jiu-jitsu and Muay Thai. Let’s break that down.

Boxing is, of course, hitting someone with gloves, while grappling is the wrestling aspect of controlling someone to gain a physical advantage. Kickboxing is a combination of boxing and karate. Brazilian jiu-jitsu is a combat sport that focuses on ground fighting and submission holds. In contrast, Muay Thai is a stand-up, striking martial art, or Thai boxing. That’s not to say a fighter might not throw in some sambo, karate or judo moves, as well.

Sound tough? It is. This is not your father’s WWE, full of predetermined winners and theatrics scripted purely for entertainment. This is probably one of the most extreme physical tests of athleticism.

Does it take a former college wrestling champion to compete at that level? No, but it doesn’t hurt either.

“When you compete at the highest level of college wrestling, it takes a long time to reach the caliber of athlete you are used to competing against,” Davis said of the shift to MMA. “Even though I was outmatched in terms of experience or skill—in every category other than fitness and training—just the ability to know where my body is in space and my overall body control, I’m much better off than the average person.”

MMA fighting exists at many different levels and with a mindboggling number of different organizations. Many amateur organizations exist, but the two biggest professional names are UFC (Ultimate Fighting Championship) and Bellator.

A former Bellator Light Heavyweight World Champion, Davis is 23-6 as a professional fighter, with no intention to retire.

“It certainly did,” he said. “I felt like I just had better conditioning … the other guy was a lot more tired than I was. It was easier for me to take shots, especially being a wrestler. You kind of dictate whether you’ll be on your feet or on the ground.”

Jack Valentin, an MMA trainer with Harrisburg Kickboxing Academy, which operates out of Harrisburg Brazilian Jiu Jitsu and Judo in Lemoyne, does not come from a wrestling background. However, he started kickboxing at 17 to get in shape for the Marines.

“I learned really quick that you need one [a wrestling background],” he said.

He noted that, when he was stationed in the South, he could get away with less wrestling knowledge because it’s not as popular there. But, returning to central Pennsylvania, he took advantage of the good wrestlers here to improve his skills.

Valentin and Dave Brogan of Harrisburg Brazilian Jiu-jitsu and Judo have seen the popularity of martial arts and fighting sports explode since Brogan opened the school in 2012 with 30 students. That’s now up to 675 members, ranging in age from teens to 64.

Brogan’s wife Monica runs a “Dangerous Damsels” self-defense class every week, and Valentin is starting an MMA class for kids as young as 5 after noticing a group of 8- to 10-year olds hanging around the gym to watch MMA practices.

The gym currently has a core group of about 25 MMA fighters with three who are actively fighting. Jace Kendle should turn pro in 2022, Darrel Horcher has already had some pro fights, and Jillian Boyer had her first amateur fight last July. Another local gym, Deep Water Brazilian Jiu-Jitsu on Colonial Road in Harrisburg, also offers MMA training.

While still in State College, both Davis and Ruth teamed with MMA trainer Ryan Gruhn, who now heads CPAMMA (Central PA MMA) there. Gruhn still trains former wrestlers, and his gym boasts many fighters who are multiple-time Muay Thai champions. Gruhn said that MMA hopefuls must be prepared to put in lots of training time and be willing to lose, day in and day out, on the mats.

Two-time national champion Bo Nickal, who graduated from Penn State in 2018 and didn’t want to leave the area, recently opened an American Top Team Happy Valley branch in Pleasant Gap in Centre County. Nickal, who won his first amateur fight last July and has his eyes on the UFC, is joined by Musa Al-Sulaimani, a former Penn State collegiate national boxing camp, and fellow teammate Anthony Cassar, who was a national champ at heavyweight for Penn State, along with several other top-level coaches.

Davis, known in the MMA world as Mr. Wonderful, now lives in Chula Vista, Calif., where he helps coach the Bonita Vista High School wrestling team. He continues to train for the next fight opportunity that might pop up. His favorite thing is to cash in on his celebrity to impact lives—through coaching and high school ministry at his church.

While Ruth admits he saw some good money in MMA, he also moved more than 10 times in 10 years. He wouldn’t mind staying still for a spell as he coaches at Illinois.

“To be honest with you, it’s really awesome to be the coach because when you’re the wrestler, you have to go through all the paces,” he said. “As the coach, I can watch and hop in whenever I want to.”

Now, about those cauliflower ears. They are like a badge of pride for many wrestlers and develop when the ears are crushed while wrestling. This causes a hematoma in the cartilage that then deforms and hardens. It can be avoided by wearing headgear.

“I’m not a fan of cauliflower ear!” said Ruth, who still has model ears, getting in the last word, just as he usually does in his fights.