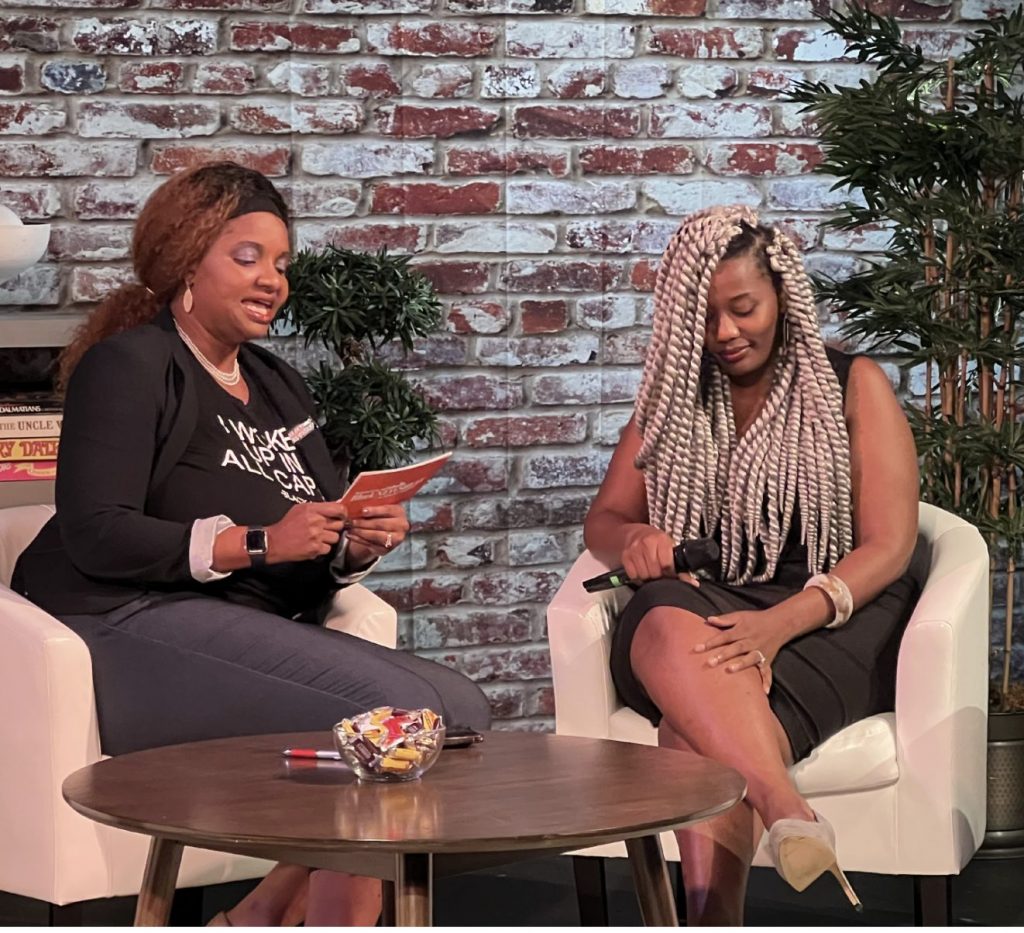 Campbell exudes confidence, strength and passion in these leadership positions. So, when asked if she experienced stage fright, I wasn’t expecting to hear her say, “yes.”

But since day one of her show, “Harrisburg Black Newsbeat” at Open Stage, she’s been nervous for every show.

“This is a completely different skillset,” she said. “I’m always thinking—are people going to laugh at my jokes? How do I keep things light, but also inform people? I’m always nervous if people will like it, but they always do.”

One year ago, Campbell began her show at Open Stage. It’s a mix of news, comedy, music, art and interviews, all with one focus—spotlighting the Black community in Harrisburg.

“We try to highlight folks who don’t traditionally get highlighted,” she said. “We want to uplift Black and brown culture and art.”

Campbell is the co-founder of the Young Professionals of Color-Greater Harrisburg and holds a full-time position at Hamilton Health Center, as well. In other words, she’s busy.

But everything she does is part of her goal to build community in the city she calls home.

“It’s always been my heart to show what Harrisburg has blessed me with,” Campbell said.

Chris Gibson, production manager at Open Stage, met Campbell at a 2020 rally protesting the killing of George Floyd by a Minnesota police officer. He heard her speak and saw the passion behind her message. This led him to invite her to host a segment on the theater’s show, “My Talented Friends Live.”

According to Gibson, her segment quickly took on a life of its own and developed into its own show.

“It’s been extraordinary,” he said. “The show has really blossomed.”

Campbell hosted shows twice a month from February through December 2021 and is resuming this month after a break in January. Shows feature several special guests—local artists, musicians, activists and business owners, among others.

Each show also has regular segments, like “Sweeping the Streets,” during which Campbell discusses goings-on in Harrisburg, and “Movies and Melanin,” when she highlights films with Black lead actors. She often shares information gleaned from the city council meetings she attends, hoping to create another path of access for residents to educate themselves.

The fun doesn’t stop at the edge of the stage. Campbell encourages audience members to engage, shout out comments, cheer and laugh out loud. While the audience has still been relatively small due to COVID precautions, there’s no lack of energy.

“People will shout things back at us, and it always works,” she said. “It’s like being in my living room.”

Gibson, who produces the show, has felt that energy as he sits behind the camera, calling it “exciting and addictive.”

“It’s always surprising how much joy the show brings to the audience, the guests and ourselves,” he said. “We come off the show with a high.”

Harrisburg hip-hop artist Mikkka3K has pursued music for about a year. When Campbell invited her to perform on Black Newsbeat, it was her biggest stage yet.

“I was intimidated,” she said. “But she made me feel so accepted.”

Mikka3K performed her song, “Visions,” on stage and received a standing ovation from the audience.

“It made me feel confident,” she said. “I really appreciate that experience. [Campbell] inspired me so much. She’s doing more for the community than she even knows.”

That’s why Campbell does what she does. She and her husband Basir Vincent, who handles much of the technical work on the show, put in countless hours prepping for each show. This is all added to the time she spends on her many other ventures in the city. To her, it’s all worth it if it’s helping others feel a sense of belonging.

“I know a lot of people who work really hard,” Gibson said. “But I don’t know anyone who works as hard as Dr. Campbell. She’s an inspiration.”

Gibson also explained how much he has learned, as a white man, from being there for every episode of the show. He encouraged other white community members to come and experience the knowledge, activism and talent of the Black community.

Harrisburg Black Newsbeat’s one-year anniversary is in February, fittingly during Black History Month. Campbell has plans for two special shows that will bring back former guests to the stage and feature new games for audience members to participate in. Artists will also have pieces for sale in the theater.

“It’s about highlighting the talented people of Harrisburg,” Campbell said of the show. “It’s all about community for me.”