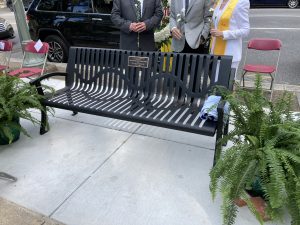 The new Toni Morrison Bench by the Road at 4th and Walnut streets.

Just a few days before Juneteenth, the holiday that celebrates the end of slavery in the United States, Harrisburg unveiled an African American historical marker.

At a ceremony on Tuesday, a new bench, named after the late author Toni Morrison, was unveiled on the state Capitol grounds.

The bench sits near the recently erected Commonwealth Monument Project’s large bronze monument at 4th and Walnut streets. Officials hope it will serve as a place for people to sit and reflect on the history before them.

The bench is part of a network of 30 benches installed around the world by the Toni Morrison Society for its Bench by the Road Project. According to Craig Stutman, Bench by the Road project chair, the idea for the project came from something Morrison said in an interview. She believed that there needed to be more monuments for African American history, Stutman said.

“Having a Toni Morrison Society Bench by the Road, right here, is a reminder to all of us of the importance of marking and remembering our missing histories,” said Gov. Tom Wolf, who spoke at the event.

The bench, along with the Commonwealth Monument, recognizes the history of the Old 8th Ward, a historically Black and immigrant neighborhood in Harrisburg that was destroyed to expand the Capitol grounds.

Also at the event, Commonwealth Monument Project officials presented Wolf with a bronze replica of a map of the Old 8th Ward.

The Toni Morrison Bench by the Road is located at 4th and Walnut streets in Harrisburg. For more information on the Commonwealth Monument Project, visit their website.