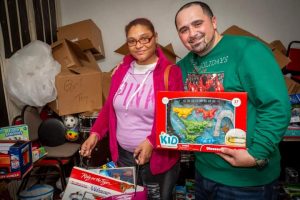 Ralph Rodriguez (right) of All You Can Inc. at last year’s Holiday Donation Drive.

Even though you may not be able to eat at your favorite restaurant this weekend, you can still support local businesses. Grab some takeout and catch up on any news you may have missed this past week, listed and linked below.

All You Can Inc. will distribute free holiday gifts to over 600 children in Harrisburg on Dec. 19, our online story reported. Founder Ralph Rodriguez hopes to spread Christmas cheer during a time when many are struggling.

Bethesda Mission’s tree lighting event at Italian Lake on Saturday will be virtual, due to Gov. Tom Wolf’s new COVID restrictions. Tom Russell, chief meteorologist from CBS21, will host the ceremony, and various Bethesda community members will be involved, our online story reported.

TheBurg Podcast closes out the year with a special focus on the arts in Harrisburg. We hear from Amie Bantz, who designed TheBurg’s cover this month and Megan Caruso, co-founder of Sprocket Mural Works. Harrisburg band Yam Yam and art blogger Bob MacGinnes make an appearance, as well.

COVID-19 cases soared over the past week in the commonwealth, our online story reported. The average new case count has reached over 10,000 per day.

Dauphin County announced another round of funding for businesses, our reporting found. Another $1.15 million is available through the Dauphin County COVID-19 Small Business Assistance Grant Program.

Faith organizations in the Harrisburg area are gearing up for the holidays in the midst of COVID. Our magazine story tells how local communities have adapted their traditions to fit with the times.

Gov. Tom Wolf tightened restrictions on some businesses and indoor gatherings on Thursday, our online story reported. The restrictions include a ban on indoor restaurant dining and the closure of gyms and entertainment venues, such as theaters, museums and casinos.

Harrisburg City Council voted on Thursday to begin collecting trash from Penbrook and Paxtang boroughs. Mayor Eric Papenfuse said this would result in over $2 million in annual revenues for the city, our online story reported.

Harrisburg’s City Council race began to take shape this week, as council member Ben Allatt said he would not be running for another term. The race for mayor has also begun as David Schankweiler, the former publisher of the Central Penn Business Journal, indicated that he planned to run, our online story reported.

Joy to the Burg celebrations will continue this year, with a twist, our magazine story reported. Instead of a live concert, “Good Day PA” will broadcast musical performances and interviews to raise money for homelessness programs provided by Christian Churches United of the Tri-County Area.

Open Stage is virtually presenting “A Christmas Carol” this month. In a Burg Review, our writer described this version as a creative take on the traditional Dickens classic.

Police Bureau funds have been the main topic of discussion within the proposed 2021 Harrisburg budget. During a budget hearing on Tuesday, residents pushed back against what would be a significant increase in funds for community policing efforts, our online story reported.

Portugal. The Man will play in Riverfront Park in September 2021 as part of Harrisburg University’s concert series. Bands Cage the Elephant and Dawes are slated to perform the same weekend, our online story reported.

Sara Bozich has some holiday gift ideas and fun things to do around Harrisburg this weekend in her Weekend Roundup!

Sprocket Mural Works has been busy creating five new murals for Harrisburg between September and October. Check out the artists’ work in our magazine story.