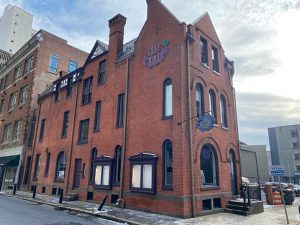 This building at 213 Locust St., Harrisburg, will become a small apartment building.

It looks like more snow and chilly days are headed our way. That makes it the perfect time to curl up at home with the January issue of the magazine. While you’re at it, catch up on this week’s local news, below.

Animal Advocates of South Central PA challenged community members to go vegan for 30 days in January. In our magazine story, read about the benefits of veganism.

Breaking the Chainz opened a resource center in Uptown Harrisburg for community members to access help in the areas of trauma, health, addiction, etc., our online story reported.

TheBurg Podcast is ditching the common phrase “New Year, New You,” and proposing an update, “New Year, New Issues.” Listen to this month’s edition to hear from Seth Dellinger of Animal Advocates of South Central PA, local author Fred Burton and Harrisburg runner Clare Flannery on a number of issues, plus our editor’s “The Most Harrisburg Thing!”

Clare Flannery is a 65-year-old runner who just completed her fifth marathon—the iconic Boston Marathon—in October. It’s a tough marathon to qualify for, so how did she do it? Find out in our magazine story.

Harrisburg University received a major donation for its proposed sustainable agriculture center in downtown Harrisburg, our online story reported. Carlisle-based The GIANT Company will donate $1 million to HU’s planned 23,000-square-foot building that, according to GIANT, may break ground later this year.

Harrisburg Young Professionals announced its new board president, Jade Honey, our online story reported. Honey will help lead the hiring of a new executive director, which the organization hasn’t had in two years.

Harristown Enterprises recently purchased the building that long housed The Plum, a clothing store in downtown Harrisburg, our reporting found. They plan to convert the building into boutique apartments.

Home sales and prices in Harrisburg both increased last month, our reporting found. In the three-county region, 774 homes sold last month compared to 761 in December 2020.

Live music will return to Riverfront Park as part of Harrisburg University’s summer concert series, this year, our reporting found. Partnering with Tröegs Independent Brewing, HU will kick off the series by presenting bands Lord Huron and First Aid Kit.

The MLK Day of Service committee has numerous volunteer opportunities for people to participate in on the holiday, our reporting found. At a press conference, they urged community members to spend their day off as a day on.

PennDOT added a second time slot for an open house next week for its planned Market Street Bridge rehabilitation project, our online story reported. PennDOT plans to rehabilitate the historic arches of the bridge.

Raymonde “Ré” Désabres Plaut was a French artist who lived in Harrisburg before passing away in 2020. In our magazine story, read about how she made an impact through her art and spunky personality.

Sara Bozich is back after a long holiday break with ideas to make this weekend a fun one. Take a look.