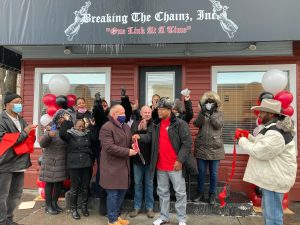 Kevin Dolphin never thought he’d be where he is today.

In the same neighborhood where he grew up–where he was involved in criminal activity as a young man–he now is counseling others.

Friday’s snow didn’t stop Dolphin’s nonprofit, Breaking The Chainz, Inc., from cutting the ribbon on a new resource center in the Camp Curtin neighborhood of Harrisburg.

“We are looking forward to helping people,” Dolphin said. “I try to give men and women the chance they need.”

Breaking The Chainz provides counseling and mentoring services, as well as adult and youth educational courses. For services that they don’t provide in-house, staff and volunteers will refer clients to partner organizations.

“It’ll bridge the gap between different organizations and bring us all closer,” said Dorothy Scott, the organization’s co-founder and chief officer of finance and operations.

Scott said that they acquired the building, which was previously a small restaurant, in 2020 and renovated the first floor into an office and meeting space. Funds from a Dauphin County gaming grant assisted in the renovations.

On an upper level of the building are four apartment units. Scott said that they plan to use those as housing for mothers and children fleeing abusive situations.

Also attached to the property is a large garage space that they plan to convert into community meeting rooms and a music studio in the future, Scott said.

Breaking The Chainz was founded in 2015 and focuses on re-entry services for men and women returning home from prison, as well as outreach to local prisons. In addition to their resource center, they have a facility on Division Street in Harrisburg. They also supply transitional housing for ex-offenders re-entering society.

Dolphin said that, as someone who was in prison for almost half of his life, he wants to help other people who are in those shoes. Helping others is something he learned while growing up, he said.

“My mother used to clothe and feed the homeless,” Dolphin said. “Those are the things that she was instilling in me.”

Breaking the Chainz, Inc. Resource Center is located at 2134 N. 6th St., Harrisburg. It is open Monday to Friday, from 9 a.m. to 5 p.m. For more information, visit their website.