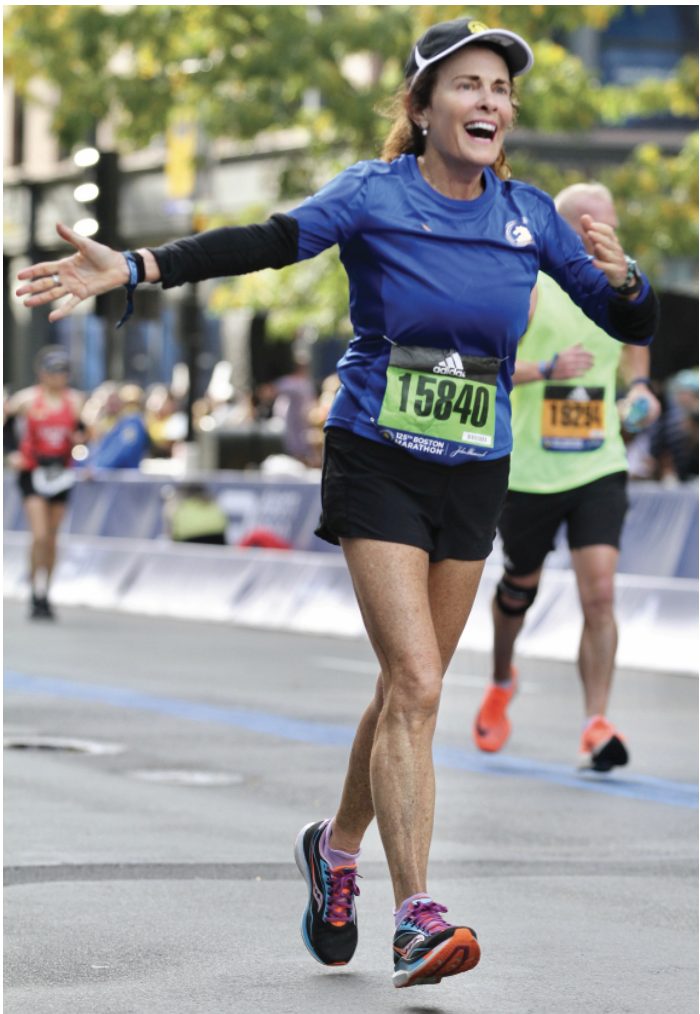 Clare Flannery at the Boston Marathon

Those words from her days as a student at Penn State are among the memories that inspire Flannery to win as a 65-year-old runner who just completed her fifth marathon—the iconic Boston Marathon—in October.

It’s a tough marathon to qualify for, with ever-escalating standards, so her participation among the 15,000 runners showed that she has hit her stride.

Flannery’s feat, set against the backdrop of Boston’s historic architecture, steep hills and cheering masses during the 26.2-mile journey’s 125th year, was even more amazing considering that she started running in her mid-50s, in what she called “almost a lark.”

That brush with death in college, the result of an allergic reaction that catapulted her into anaphylactic shock, taught her an important lesson early in life.

“I learned to appreciate every day,” said the Susquehanna Township resident.

Flannery admits that, in the 1970s, she was far from the picture of health.

Her diet consisted of mostly Tastykakes, Carnation Instant shakes and canned soup. As an aspiring actress and self-ordained “theater geek,” she had once left the athleticism to her sister, Terry, who is now one her biggest fans.

Fast-forward through the decades, when high cholesterol and a high-pressure broadcasting career prompted Flannery to re-examine her diet, lifestyle and core values. She had been a health reporter in Michigan, covering the running boom of the ‘80s, but now confesses that she could’ve used her own advice.

A chance invitation from a co-worker to run a 5K on Armed Forces Day in Harrisburg in 2012 came at the perfect time, placing her at the starting block to healthy living and self-awareness.

She heard the National Anthem before the race and saw all the runners. The camaraderie was contagious, and she caught the running bug.

“It was love at first sight,” she said.

In that first 5K on City Island, Flannery performed surprisingly well, considering she had not trained. Her sister Terry told her, “Just think of what you could do if you actually tried.”

Today, Flannery loves not only the physicality of running, but the entire experience.

As she powers around the Capitol Complex, along the picturesque riverfront, and through peaceful suburban neighborhoods, she drinks in the scenery, the people and the wildlife.  Her Facebook page is populated with inspiring thoughts and photographs of the deer, dogs, ducks, groundhogs, birds, trees and other glories of nature she encounters along her treks. She is competitive, but not against other runners—only herself.

Her photogenic face and exuberance for running have attracted the eyes of numerous photographers and media. She was featured in Boston Marathon’s publicity, with her photo seen by friends as far away as Ireland and New Zealand. Her joyful finish at the Broad Street Run in the City of Brotherly Love was captured on the front page of the Philadelphia Inquirer.

Now in what she calls her “encore years” after retiring from the state Senate in April, her bucket list includes a run in Ireland, where her large, tight-knit family has deep roots, and to share her love of running with young girls in the local Girls on the Run organization.

She has many lessons to share. The New York City Marathon was one of her first, and she learned from her missteps, she recalls, which included a wrong subway, a late ferry and eating only half a bagel before the race, but she was determined to finish.

Sporting a trademark Adidas royal blue and bright yellow finishing jacket from the Boston Marathon, she also wears a bracelet from her sister: “You do hard things.”

Now a dedicated vegan, her body-mass index, resting heart rate, blood pressure and cholesterol are those of a 20-year-old, and she lost 30 pounds through daily exercise and a plant-based diet.

Since her Boston Marathon run, many people have texted and asked how they can follow in her footsteps.

Flannery warns newbies against the “terrible too’s”—too fast, too soon, too much. Increase your mileage only 10% a week to avoid injuries and overdoing it, she recommends.

She also advises: “Decide why you want to run, then believe that you can.”

For beginners, she advises running half-a-mile, walking half, then the next week, going a little farther. And make sure to invest in great shoes.

She also recommends a training plan, which can easily be found on the internet. In addition, it helps to find a cause you believe in, whether it’s rescue animals, breast cancer or another inspiration.

“It isn’t about competition,” Flannery tells her Girls on the Run group. “It’s about self-esteem, and it’s about your body and encouraging everybody to do their best.”

“For me, running is a celebration of life,” she wrote at the close of 2020 on Facebook, after logging close to 1,850 miles in a single year. “I feel the air on my skin, the breath going in and out of my lungs, my heart beating in my chest. It is when I am most aware I am alive and healthy.”

“The ‘runner’s high’ really does exist, both after a daily run and in the long term from crossing a finish line in a marathon,” she said. “When you accomplish hard things, you realize that you have more strength than you ever realized.”

“Running is meditation through movement.”

And she labels it a “metaphor for life.”

Like that ER doctor decades ago, “It saved my life.”