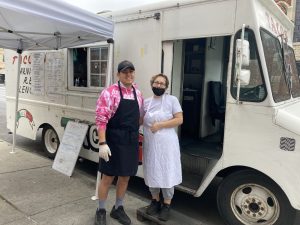 Owner Enrique Armas and his mother Elodia Saenz of MASA Authentic Mexican Cuisine in front of their food truck on Market Street. They will soon move operations to a storefront location downtown.

One of Harrisburg’s favorite taco trucks soon will trade in its wheels for a storefront location.

MASA Authentic Mexican Cuisine, a food truck that has long served patrons on Market Street, will move to downtown Harrisburg on June 6. 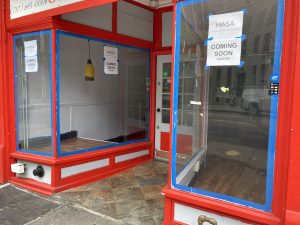 The restaurant will be located at 316 N. 2nd St., the former location of Dania’s Kitchen. The food truck will close.

Over 30 years ago, Eloy Saenz opened the restaurant on Derry Street, originally called Mexico Lindo. In the early 2000s, he moved his business into a food truck. Since then, he has retired, and his family has maintained the business. He first passed it off to his daughters Elodia and Ana, and then to his grandson.

In 2019, Enrique Armas, Elodia’s son, began taking over the business after graduating from Penn State University where he studied hospitality. Armas changed the name of the business to MASA and expanded the menu. Now, he looks forward to opening a restaurant, returning the business to how his grandfather originally started it.

“I want to continue his legacy,” Armas said.

“It’ll be a quick, fresh and cheap place for people to get something for lunch,” he said.

MASA serves tacos, burritos, quesadillas and rice bowls, among other items. Their specialty is the carnitas–slow-cooked, braised pork. According to Armas, their new location will have the same menu items. He sees the business operating primarily on takeout and delivery orders, as indoor seating will be limited.

Their 2nd Street restaurant will also allow them to remain open year-round, whereas the winter season limited the food truck.

For Armas, this is the next big step in a long future ahead for MASA.

“My father is very happy,” Elodia said. “Enrique is going to succeed.”

MASA Authentic Mexican Cuisine is currently located at 1504 Market St., Harrisburg. Their new location will be at 316 N. 2nd St., Harrisburg. For more information or to order, visit their website.