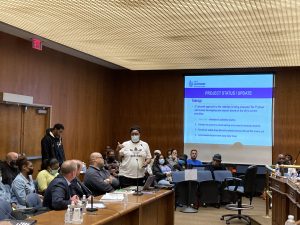 Two weeks ago, a construction project on State Street halted due to concerns from residents, something that, according to city officials, rarely happens.

Presenting to a packed house at a Harrisburg City Council meeting on Tuesday night, officials proposed a plan to redesign the Allison Hill street project to address those concerns.

“We want to look at what is going on, what was designed, and what we need,” said Wes Heisley, project manager for Dawood Engineering, which provides engineering services for the city.

The State Street Rapid Response project began in 2018 with the goal of reducing pedestrian fatalities on the road. Construction began in early April, but, only a few weeks later, the city issued a cease and desist order based on negative feedback from local residents.

Originally, the plan included reducing the number of traffic lanes, restricting parking on sections of the street during certain high-traffic hours of the day and creating bike lanes.

However, residents took issue with the planned changes, voicing concerns mainly around parking issues and the bike lanes.

“If you’re going to make decisions that impact people’s lives […] then do the homework,” resident Les Ford said. “You need to go back to the drawing board.”

Harrisburg seems to be doing just that, as it seeks to redesign the plan in the coming months.

While the details of the new design have yet to be determined, city engineers outlined their priorities. According to Percy Bullock, project manager for the city, the goal of eliminating pedestrian fatalities remains. Additionally, the city plans to maintain the current on-street parking with access for physically disabled residents, provide vehicle drop-off spots for schools, and accommodate bicycle traffic.

The city will now move forward with an expedited redesign process. Officials plan to first create several new layout options, which they then will bring to the community for input. With that feedback, they will choose one new plan to present to PennDOT for approval. State Street is owned by the commonwealth, so plans must be approved by PennDOT. All of that will happen in a matter of weeks, according to Matt Maisel, communications director for Harrisburg.

Currently, the only construction happening along the corridor is completing the construction of unfinished sidewalk ramps.

At Tuesday’s council meeting, dozens of State Street residents shared their thoughts about the project.

Resident Tim White, who lives and works on State Street, said that residents didn’t receive enough notice about the project. He only found out what was taking place when he received a flyer from a neighbor urging State Street residents to come to the council meeting.

Matthew Duvall, who has lived on the street for over 50 years, expressed opposition to the addition of bike lanes.

The resistance to bike lane additions was a common theme among residents who spoke. However, according to city officials, getting rid of them altogether may not be possible.

“If we use state funding, we have to adhere to what the state wants,” Maisel said.

According to Maisel, since the road is owned by PennDOT and the state is contributing over half of the $1 million total project cost, they must approve the plan. And part of that plan must include a multimodal aspect, meaning it must address bike traffic in some way.

“We are probably not going to make everybody happy,” said council member Dave Madsen. “But safety has to be our priority moving forward.”

At the council meeting, State Street resident Lisa Jenkins agreed on the need for safety. Her son was hit by a car along the corridor, she said.

“State Street is a dangerous street, and the most important thing is people’s lives,” she said.

However, Jenkins, along with several other residents, voiced their opposition to major changes to the road. Instead, they suggested alternative ways of addressing safety, such as with increased police enforcement, better lighting, more traffic lights, and additional traffic cameras and speed limit signage.

According to city officials, the redesign timeline will be much faster than typical road design processes. Designs often take years to create, but the city plans to redesign and move toward construction in a matter of months in order to continue working with contractor Kinsley Construction and to avoid any further accidents on State Street, Maisel said.

However, the city recognized the need for residents’ input on the project and said that community outreach will take place over the next few weeks.

“People need to be heard, and they deserve to be heard,” Maisel said. “We can’t change what happened in the past, but we can fix what happens in the future.”