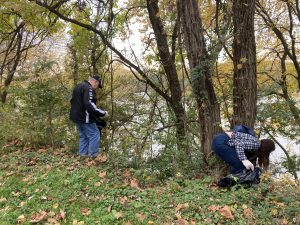 Volunteers clean up trash at the site of a future tiny home village for veterans near the Susquehanna River.

On Veterans Day, a day meant to honor those who have served our country, an organization took a step in a project that will serve veterans locally.

On Thursday, Veterans Outreach of Pennsylvania gathered over 90 volunteers to clean up the site of a future tiny home village for homeless veterans in Harrisburg.

“Today is about announcing that we are here,” said Tom Zimmerman, president and co-founder of the nonprofit. “It’s about exposure and getting the community involved.”

The project includes constructing 15 tiny homes and a community center on a five-acre plot of land off of S. Front Street that will provide temporary housing for homeless veterans. The site, which was been empty for decades, is located near the PennDOT building. Rendering of the tiny home village.

“We need to make sure that no veteran goes without a roof over their head,” said Harrisburg philanthropist Peggy Grove, who donated the land to the nonprofit.

According to Zimmerman, the group plans to break ground on the project next fall, depending on when they get certain state approvals.

“This site cleaning means that we are entering phase two,” he said. “We are actually going to be seeing some work.” Tom Zimmerman of Veterans Outreach speaks at the cleanup event.

“In the military, we have this wonderful feeling of never leaving anyone behind,” said retired Brig. Gen. Wilbur Wolf III, an advisory board member for Veterans Outreach. “This place will allow them to find home again. It is needed badly.”

Zimmerman also announced that they were kicking off their campaign to fundraise $3.5 million for the project.

On Thursday, after the Perry County Color Guard presented and retired the flags and officials spoke on the importance of honoring the country’s veterans, volunteers began picking up trash.

Matt Coleman and Mona Johnson, two veterans and Harrisburg residents, heard about the project on the news and decided to help with the cleanup.

“It’s important for us to uplift our brothers that come back,” Coleman said. “It’s a good way to give back.”

Volunteers cleaned up trash and brush, weed-whacked and white-washed a wall on the property.

Zimmerman expects that the tiny home village will be completed by the spring of 2023.

“Some veterans have fallen on very hard times and those veterans need our help,” he said. “We are trying to create an atmosphere of safety, that’s secure and therapeutic.”

For more information about Veterans Outreach of Pennsylvania, visit their website.