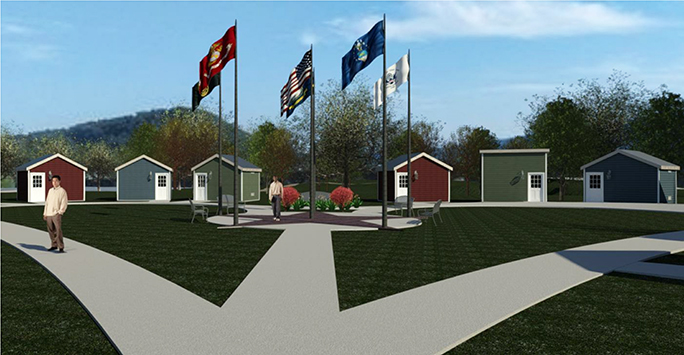 A rendering of the proposed project, featuring tiny houses that would house veterans.

Facebook has been blamed for everything from political division to spreading fake news, but, to Tom Zimmerman, it also can be a force for good.

A few years ago, Valerie Fletcher, a fellow alumnus at Red Land High School, posted a short video clip of a “veteran’s village” in Racine, Wis., a community of tiny houses that offers transitional housing for homeless vets.

Zimmerman’s thought: why can’t we do that here in Harrisburg?

“This model for homeless veterans is popping up all over the country,” he said, adding that similar concepts exist in cities like Savannah, Ga., Kansas City, Mo., and St. Petersburg, Fla.

Since then, Zimmerman, along with an eight-member board of directors, formed Veteran’s Outreach of Pennsylvania, a nonprofit dedicated to building a similar community for homeless veterans in Harrisburg.

Board members have their eyes on a five-acre site along the Susquehanna River, just south of the PennDOT building, which has been empty since the Phoenix Steel Corp. (formerly the Central Iron & Steel Co.) shut down operations some six decades ago. There, they hope to build 15 houses measuring 12-by-14 feet each, plus a 6,000-square-foot community center and a 26-space parking lot.

A rendering of the proposed community center (right)

Under the proposal, the detached houses would contain the basic necessities—a sleeping area, a half bath, a desk, a small sitting space, etc. The community center would have meeting space, a dining area, activity rooms, a laundry and other amenities to help the men and women.

Unlike some transitional facilities, there would be no time limit imposed. Residents would be able to stay as long as they needed to get back on their feet, Zimmerman said.

“The idea behind it is that veterans don’t succeed when you put 30 or 40 of them in a room in a big, communal setting,” he said.

Harrisburg philanthropist Peggy Grove and her son, Michael, under an entity called the Green Chair Trust, own the land, but have agreed to donate it to the organization, according to Zimmerman and Planning Bureau documents. Grove could not be reached for comment.

Currently, the Capital Area Greenbelt runs through the land, and, on nice days, bicyclists and runners often use the area, commonly known as Phoenix Park, where industrial ruins from the steel mill still are visible. 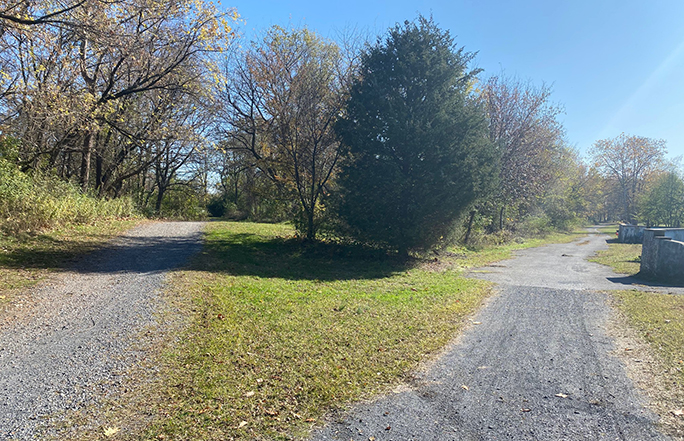 The development would occupy this site, now known as Phoenix Park

Grove would be willing to move the Greenbelt trail to just north of the site, a plan supported by the Capital Area Greenbelt Association, according to Planning Bureau documents.

In a letter to Zimmerman, CAGA President Carl Dickson expressed support for the project.

“We applaud the Groves’ and your generosity to help reduce homelessness in Harrisburg while allowing users of the Capital Area Greenbelt trail, and residents of the proposed Veterans Village, to continue to enjoy the trail’s connectivity, diversity, and appeal,” he wrote.

The Planning Bureau has recommended project approval, but with conditions. It would like to see several significant changes to the plan, including a more grid-style configuration, a smaller parking lot and a smaller overall footprint.

This past week, the project went before the city Planning Commission, as it needs both a variance and a special exception. After some discussion, it was tabled until the January meeting so that Veteran’s Outreach can consider the city’s desired changes, Zimmerman said. 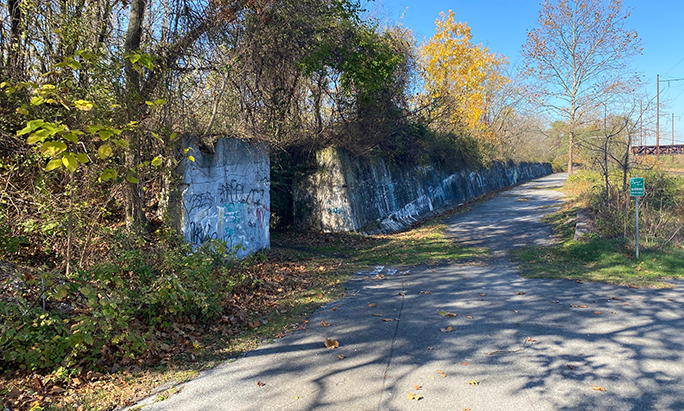 Some of the steel factory ruins on the site.

The project also will require approval from the city’s Zoning Hearing Board, and, separately, its land use plan will need both Planning Commission and City Council approval.

Zimmerman declined to offer a timeline, saying that it depended on the city approval process, as well as a capital campaign to raise the $3.5 million project expense.

“We’ll get this done,” he said. “Everyone knows a veteran who served for our freedom. This is our way of giving back.”

For more information about Veteran’s Outreach of Pennsylvania and to contribute to the project, visit www.veteransoutreachofpa.org.