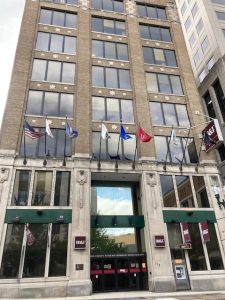 An office building at 112 Market St. will be converted into apartments with first-floor retail space.

Downtown Harrisburg soon will have another new apartment building, as City Council approved an office-to-residential conversion on Tuesday.

Harristown Enterprises will lead the $7 million project, which will include about 35 one- and two-bedroom apartments, with first-floor retail space, according to CEO Brad Jones. The 51,000-square-foot structure has served as an office building since its construction in 1918.

Most of the current companies occupying the building have expiring leases and will be relocated, though tenant Tri-County Planning Commission may stay, Jones said.

In recent years, Harristown and several other local developers have renovated and converted numerous aging, often rundown office buildings to apartments, adding hundreds of new residential units to the downtown.

On Tuesday, council also passed a resolution to enter into an agreement with Impact Harrisburg to conduct a disparity study to determine where diverse business vendors are underrepresented in the city’s public procurement and contracting processes.

Impact Harrisburg plans to hire a company to conduct the study to determine where the city can provide additional resources for minority, women, LGBTQ, disabled and veteran-owned businesses.

“We believe it will help the city establish goals around MBE, WBE, DBE and the range of other categories that show the kind of equity and diversity that we would like to see as a city,” said Sheila Dow Ford, director of Impact Harrisburg, at last week’s council work session.

Both the city and Impact Harrisburg will contribute up to $125,000 for the study.

City Council on Tuesday also approved a settlement agreement with bond insurer Ambac Assurance to help pay down debt related to general obligation bond defaults incurred during the city’s financial crisis in 2012 and 2013. Through the agreement, the city hopes to accelerate debt payments and reduce its overall debt load.