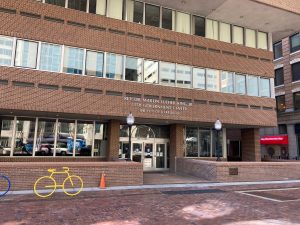 Harrisburg has been compared before to Stockton, Calif., as both cities have a shared history of financial crisis.

Mayor Eric Papenfuse hopes Harrisburg soon will have another thing in common with the western city, this time more positive: a guaranteed income program for residents.

“This is something that we are considering in Harrisburg, more than considering,” Papenfuse said. “I want to move forward with it.”

During the city’s weekly Facebook Live event last week, Papenfuse spoke virtually with former Stockton Mayor Michael Tubbs about his city’s experience with a trial for an income floor program to combat poverty.

The program, as piloted in 2017 in Stockton, gave $500 per month for two years to 125 residents at or below the city’s median income level.

While Stockton didn’t have the resources to offer the program to the whole city, municipal officials saw it as a way to test it on a small scale, receive data and advocate for a similar program at the federal level, Tubbs explained.

“Poverty was the root of all of our issues in Stockton,” Tubbs said. “We couldn’t just point our fingers and do nothing. We had to use our city as a laboratory for democracy.”

Tubbs said that the findings of the guaranteed income pilot showed that many recipients transitioned from part-time to full-time jobs, working more than before. They also found that most residents used the funds for expenses related to utilities, food or their children’s needs. Additionally, as a result of the program, residents’ mental health improved, he said.

“The data shows that $500 was enough to serve as a bridge for opportunity,” he said.

Since then, Tubbs started “Mayors for a Guaranteed Income,” to activate other city officials to try out the program for themselves.

Papenfuse said that he has pledged his support, joining 45 mayors from across the country. Now, he wants to start a similar program in Harrisburg.

With the $48.8 million in federal funds coming to the city as part of the American Rescue Plan, Papenfuse said that some of that money may be allocated to a multi-year income floor program.

Papenfuse said that he plans to implement the program with the help of the University of Pennsylvania. He has not announced a timeline for the project.

“The wealth disparity in Harrisburg and throughout the country has only been further exacerbated by COVID,” he said. “If we are going to bounce back, we’ve got to make sure everyone bounces back and address these basic systemic issues.”