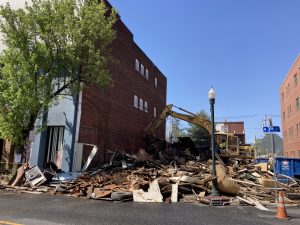 Blighted buildings on the 1400-block of N. 3rd St were demolished on Thursday, making way for a new project.

Two blighted buildings in Midtown met their fate on Thursday, as crews razed them in preparation for new development.

In their place, at 1414 and 1416 N. 3rd St., developers have plans to construct a three-story, multi-use building with art space and a restaurant.

Owners of Harrisburg-based ModernRugs.com, Zachary Nitzan and Tahirih Alia, purchased the two dilapidated buildings, along with two adjacent buildings, in 2016. Their online rug business is currently located in one of these buildings, at 1404 N. 3rd St. They are in the process of renovating the building at 1408 N. 3rd St., which was once a hardware store, as well.

The goal of the estimated $6 million project is to connect the two standing buildings with the new building, once constructed.

The plan calls for a 9,000-square-foot building, featuring a façade of dark brick, large windows and metal mesh screens. According to Nitzan, the first floor would likely feature a restaurant. The second floor would be an art studio, exhibit and workspace, extending through all three of the owners’ buildings, once connected. The third floor would house office space. The plans also call for a rooftop deck and bar. 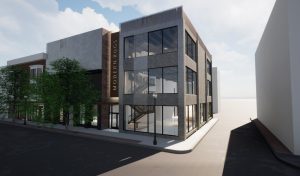 “We are both really passionate about art and design,” Alia said. “This location is really ripe with possibility for being an arts district.”

In 2020, ModernRugs.com received $60,000 in Dauphin County gaming grant funding for the demolition costs. Before demolishing the buildings, they were deteriorating, Nitzan said.

The couple expects to break ground on the new building within a year and complete the project by 2025. In the meantime, they plan to conduct outreach with the community to hear what they would like to see, they said.

“We really love Harrisburg. It’s an amazing community,” Alia said. “We want to be mindful and make sure this is good for all parts of the community.”