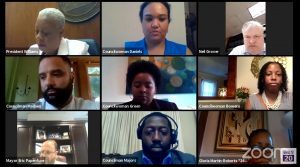 Council voted against entering into a contract with a former City Council president on Tuesday, with some members charging that the position was a campaign move by Mayor Eric Papenfuse.

The resolution was introduced at last week’s work session, when Papenfuse said he wanted to hire Gloria Martin-Roberts to facilitate communications between the administration and council, the Dauphin County commissioners and the public.

Several Harrisburg officials, including Police Commissioner Thomas Carter, joined Tuesday’s legislative session to express support for Martin-Roberts. But that was not enough to get council on board. Many members did not hold back in expressing their concerns with the resolution.

Other council members brought up a similar issue with the timing of the position beginning just months before the 2021 mayoral campaign. Papenfuse is widely expected to run for a third term next year.

“Mayor, you should not have to hire a senior management consultant to repair damaged relationships within your own administration, with the Dauphin County Commissioners or with any other local stakeholders,” council member Danielle Bowers said.

Martin-Roberts, who attended the virtual meeting, responded to the concerns by saying that she would have no involvement in the mayoral election.

“I would think that for those of you that know me well, you know I’m honest and I’m ethical,” Martin-Roberts said. “I’m not in here to do anything dirty. The word ‘cronyism’ was mentioned; I take offense to that.”

However, her efforts to persuade council ultimately failed when members voted against the resolution 4-2, with Council President Wanda Williams and council member Dave Madsen voting in favor. (Council member Ben Allatt was not present.)