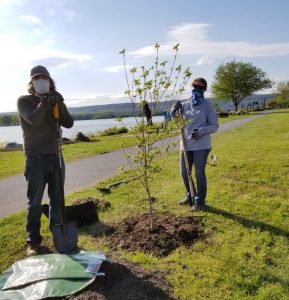 Volunteers Zac Monnier (left) and Rachel Reese at a past tree planting event in Riverfront Park.

This spring, Harrisburg is inviting residents to test out their green thumbs.

In May, the city is holding a “Tree Tenders” class for locals to learn how to plant and care for city street trees. Harrisburg Arborist Ellen Roane hopes to build a base of volunteers in the city.

“We are losing trees at a much faster rate than we are replacing them, and that’s scary,” she said. “Volunteers can do a lot to help with tree planting.”

The workshop is part of Pennsylvania’s TreeVitalize program, an initiative by the state to provide communities with education and resources to plant trees. The “Tree Tenders” workshop is one way they do that.

Roane said that the online class is free and open to anyone, tree hugger or newbie, and will take place on Tuesdays in May. An opportunity to meet as a group outside for the training will be available, as well.

The course will teach people about the biology of a tree, how to plant and maintain it, where to plant it, and why trees matter in an urban environment, explained Rachel Reese a volunteer with the city who attended a past “Tree Tender” course.

Reese works for the PA Bureau of State Parks, so knows a thing or two about trees. But she wanted to put her skills to work in her own neighborhood.

According to Roane, the city doesn’t have the resources to plant large numbers of trees on its own. Essentially, she’s a one-woman show. She has about five colleagues in the city Department of Parks and Recreation who maintain trees, but their efforts are largely focused on trees in the city’s parks.

Harrisburg has built up a long list of dead and dying trees in the city that take maintenance priority, leading to more trees coming out of the dirt than going in, Roane said. She hopes the “Tree Tenders” course will attract volunteers and build their capacity.

“I’m trying to build a volunteer workforce in the city,” she said. “The city doesn’t have the staff to be planting street trees.”

Roane said that she has a few volunteers, like Reese, who help with occasional plantings, but she wants to create a consistent team. She’s looking for a group that can assist with summer maintenance projects like weeding, pruning and mulching young trees, as well as helping plant in the fall.

Most recently, Roane and some volunteers planted 30 trees in the Camp Curtin neighborhood. She hopes to add to the green canopy of other streets in the city.

“Trees are really critical for life,” she said. “Trees will soften the appearance of the city and beautify it, but will also provide shade and cooling. They will even reduce energy usage.”

Community members can register for the “Tree Tenders” course, here. For neighborhoods with at least six households interested in having trees planted along their sidewalks, contact Ellen Roane at earoane@harrisburgpa.gov.