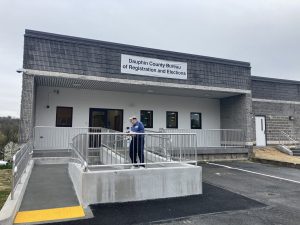 Dauphin County officials on Friday showed off their new “one-stop-shop” for election ballot counting and processing, having transferred operations to a standalone building in Swatara Township.

County elections officials recently moved into a building at 1251 S. 28th Street, which is four times larger than their previous space in the county’s downtown Administration Building.

“During the recent primary and general election, we found that the space capacity just wasn’t able to keep up with the needs,” Dauphin County Commissioner Mike Pries said. “This enables us to have a larger facility.”

The primary factor in the decision to move came once Gov. Wolf signed Act 77 in 2019, allowing residents to vote by mail. Where Dauphin County previously saw a high of 7,000 absentee ballots in 2004, 70,000 residents voted by mail in the 2020 U.S. general election, Pries said.

With the rising volume of mail-in ballots during the pandemic, Dauphin County Elections Office Deputy Director Chris Spackman said that he was relieved to have the new office, explaining how cramped the old one was.

The Bureau of Registration and Elections office is housed in the former Meals on Wheels kitchen space, a two-story building already owned by the county. The building sat vacant since 2014, before undergoing renovations for election use, including increased security measures.

One of the greatest draws for voters may be the parking lot, which makes the building more accessible than the downtown location for many people, Pries said.

Inside the office is a window service area for voters to return ballots and receive assistance with voter registration.

While Director of Elections and Voter Registration Jerry Feaser encourages people to return ballots in-person to ensure they’ve made no errors, a dropbox will be located outside the building. Dropboxes will remain at the county Administration Building, as well.

The “War Room,” for counting and sorting ballots, occupies the lower level of the office, Pries said. 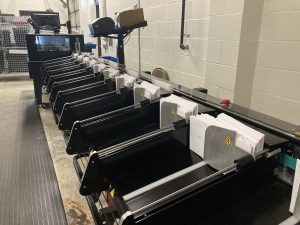 The star of the show is the county’s new “Agilis Ballot Sorting System,” which scans, counts and sorts ballots. The $309,000 machine can complete four days of manual work in one hour, Pries said.

Spackman said that the new technology will increase accuracy by eliminating human error.

So far, the county has received 14,000 applications for mail-in ballots for the primary municipal election. Feaser said that the county will likely send out ballots by the middle of next week.

The primary election will take place on May 18. The last day to register to vote in the election is May 3, and residents can apply for a mail-in ballot until May 11. The general election is on Nov. 2.

“These are exciting times for us,” Pries said. “The mail-in ballot process does enable us to go from the 25% normal turnout in a non-presidential election and see those numbers start creeping up.”

Be on the lookout for our Voter’s Guide, featuring statements from Harrisburg mayoral and city council candidates, coming in our May issue of TheBurg Magazine.