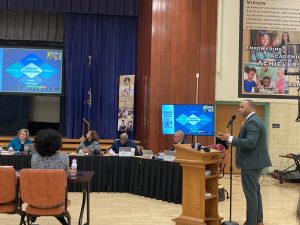 The Harrisburg School District is making a significant change for the next school year.

At a school board meeting on Monday, district officials announced a plan to move fifth-grade students from its middle schools back to the elementary level.

“The data is showing that the 5th grade being at the mid-level is problematic,” district Superintendent Eric Turman said.

According to Turman, the move has been under discussion since the fall, after the district noticed negative declines from 4th to 5th grade in academic and behavioral data.

Turman cited that, under the current model, when students move to 5th grade, the district has seen decreased attendance, increased suspensions and decreased academic improvement.

The district believes that keeping fifth-grade students in elementary schools will provide a better structure and environment for students, while also fitting better with the current curriculum. Turman said that this also will benefit the “jam packed” middle schools by decreasing the overall student population in those buildings.

In a recent survey issued by the district, a majority, 72%, of teachers and parents who responded believed that the transition would be beneficial.

Turman said that elementary students moving into 5th grade will remain in the same elementary school that they were previously in.

Additionally, kindergarten will be added to Cougar Academy.

The new school grade configuration will affect the following schools and will be as follows:

Turman explained that all of the district’s elementary schools have enough space to accommodate the additional grade. Many of the schools have several unused classrooms that will be utilized, he said.

At Monday’s meeting, district Receiver Dr. Lori Suski approved the plan. It will go into effect in the coming school year.

According to the district, further communication on the plan will be sent to parents beginning on Tuesday.

“We are very excited about the opportunity,” Turman said. “This was well thought out.”

In other news, Suski also approved the hiring of Heidi Zula as the district’s new director of human resources. Her salary will be $125,000.