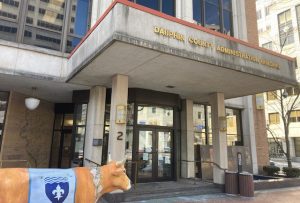 The federal evictions ban has come to a screeching halt, leaving some advocates wondering what comes next for the tenants they represent.

Darrel Reinford, executive director of Christian Churches United of the Tri-County Area (CCU), expects the lifting of the eviction moratorium to make an already bad situation even worse for lower-income tenants.

“There’s no question in my mind that we are going to have an eviction crisis,” he said.

For over a year, CCU has been working with Dauphin County to distribute federal Emergency Rental Assistance Program (ERAP) funds, which helps qualified tenants pay rent when the eviction ban was in place.

However, the U.S. Supreme Court last week nullified the federal evictions ban, which wasn’t due to expire until early October. State and local eviction moratoriums, put in place to prevent displacement of renters from their homes during the health crisis, had already expired.

In Dauphin County, officials have been busy since March distributing over $18 million in federal and state money to tenants behind on rent.

Throughout the nation, distributing those funds, which were passed as part of the federal American Rescue Plan, hasn’t been a speedy process. According to a New York Times article, about 89% of the funds have not yet been distributed.

It’s been a similar situation in Dauphin County, which, by Aug. 20, had distributed only about 27% of the funds to a little over a quarter of the 3,062 applications received.

“This program is more than just money,” said Dauphin County Commissioner George Hartwick. “We are finding out what services can help people become housing stable after the program is no longer able to pay rent and utility costs.”

According to a spokesperson for the county, applicants are receiving, on average, 40% more money than they requested as staff work with them to determine what they are eligible for.

The money can be used on back rent, future rent or utility payments of up to 12 months.

Reinford said that the process has been slower than he would’ve liked.

“It’s definitely an issue getting money out to people,” he said. “The infrastructure isn’t easily in place to ramp up programs like this quickly.”

Reinford said that it’s been even harder since CCU is a small nonprofit. Although the process of distributing the ERAP money has improved from when they distributed a previous round of rent relief, he said.

Federal reporting requirements can be cumbersome, as well, he added.

CCU has been interacting with applicants over the phone and by email, prioritizing those who are at a higher risk of eviction.

While some people are just one or two months behind on rent, others are much further behind, Reinford explained.

“There are a lot of people who have been struggling for a long time,” he said.

Many residents may not be affected immediately, however, due to a backlog of eviction cases in the courts, Reinford said.

However, Kay Pickering, a housing counselor at the Center for Peace and Justice in Harrisburg, said that she actually isn’t expecting a big spike in evictions, only because she doesn’t think they’ve stopped.

“I haven’t seen that landlords and tenants were paying much attention to [the moratorium],” Pickering said. “I don’t think we’ll see a marked difference. Most landlords have been doing what they’ve wanted to do.”

From what she’s seen, some landlords have ended leases or found other loopholes in the eviction ban. Having said that, most landlords that she has been working with through the ERAP have been receptive, she said.

But the county noted that, since the moratorium has ended, landlords may be less likely to wait for the assistance and instead file for eviction, said a county spokesperson Brett Hambright.

Reinford added that CCU is trying to assure landlords that the money is coming soon.

“We are certainly understanding that landlords have been hurting for a long time,” he said.

According to Scott Dunwoody, executive director of Bethesda Mission in Harrisburg, there was always a large demand for shelter in Harrisburg, but he expects homelessness to increase even more as the moratorium ends.

“It will add to the number of people who will be looking to find someplace to stay,” he said. “We will probably see more men wanting to come into our men’s shelter and women coming to our new women’s shelter.”

For those waiting for funds who are facing eviction, an ERAP processor, who asked to remain anonymous, said, “If you have applied online and heard nothing back from anyone, or your case seems to be going nowhere, you need to be as proactive as possible to initiate intervention.”

The processor recommended emailing the county or calling 211 to notify them that they may be getting locked out soon. That way staff can prioritize their application.

Pickering has seen ERAP funds help some of her clients; she believes it’s necessary. The problem is whether those who are still waiting will get what they need in time.

“It’s taking much too long,” she said. “It takes a toll on the tenant and the landlord.”