Pedestrian-friendly changes are afoot for Forster Street, as the city today announced that it will receive a federal grant to remake a stretch of the dangerous road.

Mayor Eric Papenfuse today said the city will receive $832,437 to reduce the width of Forster Street between the Harvey Taylor Bridge and N. 2nd Street, among other changes.

He said that the Harrisburg Area Transportation Study (HATS), a regional transportation planning body, voted this morning to fund the project construction, which will take place next year.

The actual cost of the project is nearly $1.1 million. In its 2021 budget, the city will provide its 20-percent match of $245,818 by taking on the pre-construction design and inspection process, Papenfuse said.

“There will be a reduction in the amount of distance in which pedestrians have to go in crossing the street,” he said. 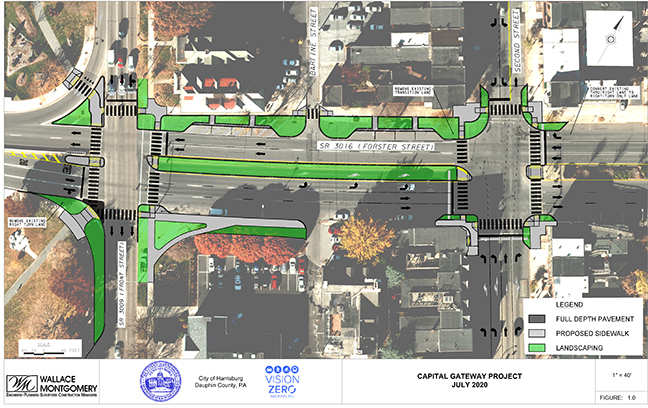 A rendering of the pending Forster Street changes

The city applied in June for the money,which originates with federal Department of Transportation funds. At the time, city Engineer Wayne Martin said he was optimistic about receiving the grant because prior HATS studies already had identified the area as currently unsafe for motorists, pedestrians and bicyclists. It also is a regional connector between the city and suburbs, as well as a major commuter route.

According to city data, the Front and Forster area is the most dangerous roadway in the Harrisburg, with 47 vehicle crashes recorded between 2015 and 2018 within 250 feet of the intersection.

Papenfuse today touted the news, especially when combined with recent word that the Pennsylvania Department of Transportation had agreed to substantial improvements to another commuter route—State Street on Allison Hill.

“This comes on the heels of announcing a few weeks ago that PennDOT had agreed to fund the most dangerous boulevard in the city, which is State Street,” Papenfuse said. “Both of those projects are now going to be able to move to construction. Indeed, we’ll have construction completed in 2021.”

These projects both align with the city’s “Vision Zero” program to eliminate pedestrian fatalities.

In addition, the city plans to begin work in the spring on returning N. 2nd Street to two-way traffic between Forster and Division streets, as well as work to improve N. 7th Street. Both of those projects should extend into 2022.

“There’s going to be a lot of Harrisburg under construction for sure next year in 2021,” he said.

Speaking of Forster Street, Papenfuse today said that the city has received a lot of “feedback” over the past week regarding recent traffic light changes to Forster Street between the state Capitol Complex and the Harvey Taylor Bridge.

The city, along with PennDOT, has placed “telescopic lenses” on top of the light signals, which make the lights more difficult to see from far down the road or from the side streets. They also have changed light angles and brightness.

“All of this combined is designed to slow speeds,” Papenfuse said. “We want to try and slow speeds around this section of Forster Street. If you’re going the speed limit, you’ll have no trouble following the light cycles, but, if you’re going too fast, it can be a real change in patterns.”

“I want to assure people that this is a thoughtful approach; it’s being done in partnership with PennDOT,” he said. “Check it out. If you have an opportunity, drive through safely, and you’ll see that the signal timing, the angles, the brightness have all changed along Forster Street, and it’s all designed to slow speeds and make it easier for everyone to share the road safely.”