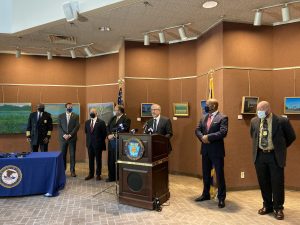 Getting illegal guns off the streets is the focus of a new initiative by federal and local law enforcement agencies.

At a press conference on Tuesday, Acting U.S. Attorney for the Middle District of Pennsylvania Bruce Brandler announced “Operation Scarecrow,” which targets those who illegally purchase and possess guns.

The initiative is a partnership between the attorney’s office, the Bureau of Alcohol, Tobacco, Firearms and Explosives, and the Harrisburg Police Bureau.

“As we all know and read about far too often in the press, violent crime is rising around the nation,” Brandler said. “Unfortunately, Harrisburg is not immune to this trend and ‘Operation Scarecrow’ is part of our strategy to reduce violent crime.”

Under “Operation Scarecrow,” officials will focus on finding those who are prohibited from purchasing a gun due to a prior felony, but who use a third party, or “straw party,” to buy guns for them. All parties involved in these straw transactions are subject to criminal prosecution, Brandler said.

The initiative began this past April and will continue indefinitely, he added.

Since its beginning, officials have charged 10 people for 139 straw purchases. Only 26 of those firearms have been recovered, Brandler said, explaining how hard it is to track illegal guns.

Often officials are able to track down criminals involved in straw purchases through tips from gun dealers or colleagues of criminals who “snitch,” Brandler said.

“When you go to any neighborhood in Harrisburg, the question you hear is how can we get the shootings to stop,” Mayor Eric Papenfuse said. “It is a complicated answer to those questions, but one of the things we have to focus on is getting the guns off the street that are being utilized illegally.”

This year in Harrisburg, there have been eight homicides, a decrease from last year’s numbers, Papenfuse said.

According to Harrisburg Police Commissioner Thomas Carter, the police bureau has taken 153 illegal guns off the streets this year.

Brandler said that “Operation Scarecrow” has been started in other districts in the state, as well.

The initiative is part of Project Safe Neighborhoods, a U.S. Department of Justice program that aims to bring together all levels of law enforcement to reduce violent crime.

“We routinely target and prosecute other violent criminals who plague our community,” Brandler said. “But prosecuting gun violence is the centerpiece of our strategy to reduce violent crimes in Harrisburg.”