The federal building in downtown Harrisburg

The owner of a landmark downtown building says that he’s ready to proceed with a “luxury apartment” project for Harrisburg.

On Wednesday, developer Justin Etzin stated that he’s preparing to move forward with a plan for “The Federal,” a proposed 200-unit apartment building, which also would include several restaurants, at the corner of N. 3rd and Walnut streets.

“The 200 apartments will bring much needed residential space to Harrisburg and be the most luxurious available,” said Etzin, CEO of Global Ocean Investments, which is based in the Seychelles, an island nation in the Indian Ocean.

In February, Etzin bought the 56-year-old, 251,000-square-foot building for $10 million from the U.S. government. It currently is listed back on the sales market for $22 million. Etzin has said previously that having the building on the market is “standard practice” as he gets investors onboard and the project underway.

The U.S. government is currently finishing up a new federal courthouse at N. 6th and Reily streets, where it soon will move courthouse staff. Other federal agencies in the downtown federal building are also slated to relocate.

Etzin stated that he would begin to seek city approvals, including from the city’s Zoning Hearing Board and Planning Commission, for the project, which includes construction of a new, split-level, 8,000-square-foot addition for two rooftop restaurants–an American-style steak house and a “luxury” Italian restaurant.

“This new glass-top pavilion we are proposing will house a top restaurant with sky bar and gardens, allowing visitors and residents of Harrisburg to dine overlooking the Pennsylvania Capital Complex,” Etzin said. 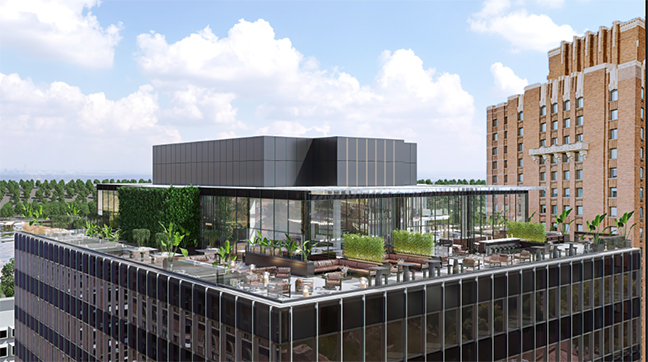 A rendering of the proposed rooftop addition to the federal building (credit: Global Ocean Investments)

In a news release, Etzin said that the apartment units will include high-end finishes, eat-in kitchens, master suites and dens. The building also will include a movie theater, fitness center, lounge and nail and hair salon, he said.

According to Etzin, construction would begin once the federal government vacates the building in early 2023 and would be completed by 2025.