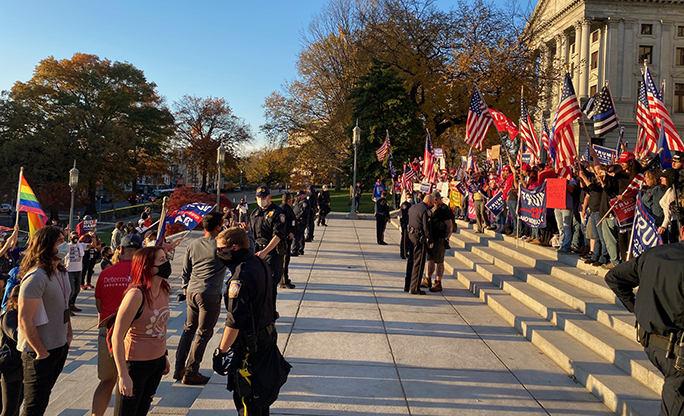 Capitol police stand between pro-Biden and pro-Trump groups on the PA Capitol steps.

Worlds—and worldviews—collided today at the PA Capitol in Harrisburg, as supporters of the two presidential claimants held competing rallies, with police keeping the sides apart.

The day began peaceably and even joyfully around noon, after the Associated Press called Pennsylvania for Democrat Joe Biden, putting him over the 270-electoral-vote threshold to claim the presidency.

That call turned a pre-planned “Count Every Vote” rally into a celebration, and a party atmosphere broke out on the Capitol steps, with dancing, singing and chanting, on the sunny, unseasonably warm November day. The crowd waved “Biden/Harris,” rainbow and Black Lives Matter signs and flags, with almost everyone wearing a mask.

“We’re just so happy,” exclaimed Jennifer Davis of Lancaster County, who had just finished a line dance on the steps. “We’ve been waiting four years for this.” 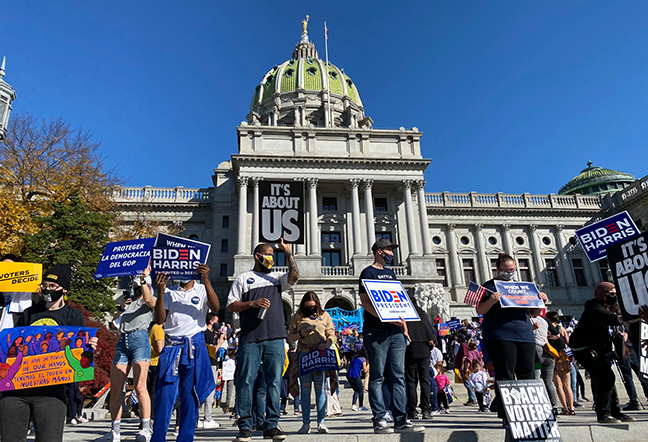 The pro-Biden “Count Every Vote” rally

It didn’t take long, though, for the mood to shift.

By mid-afternoon, followers of President Donald Trump had assembled for a “Stop the Steal” rally on the other side of the Capitol building. Before hundreds of mostly unmasked Trump supporters around the large fountain, several speakers repeatedly made unproven claims of voter fraud and led attendees in chants of “Lock him up” for Biden and “Four more years” for Trump.

“I’m here because this election is being taken from us,” said John Scott, who had driven to Harrisburg from Maryland. “We can’t allow that to happen.” 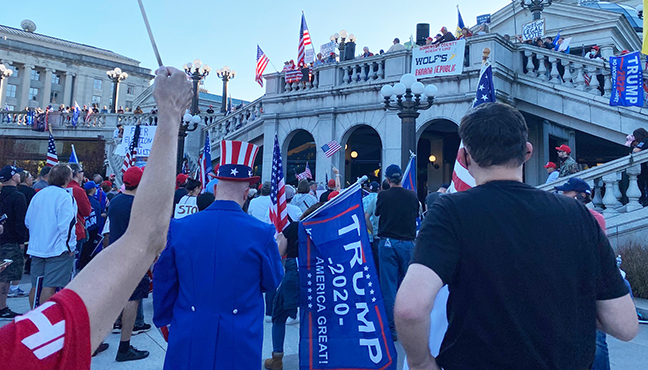 Meanwhile, back around the front of the Capitol building, police blocked off N. 3rd Street to vehicles.

A smaller, pro-Trump rally had taken root there, with a line of supporters standing at the top of the Capitol steps, a man with a megaphone shouting at a group of pro-Biden supporters on the landing below. After the rally at the rear of the Capitol ended, many people walked around the building, and the pro-Trump group swelled, including both families with children and a line of heavily armed men openly carrying guns.

The Capitol police placed themselves between the two groups, and the atmosphere often grew tense, especially as the man with the megaphone hurled conspiracy theories and insults at Biden, at his supporters and at Democrats in general. They also played pro-Trump songs and what’s become a favorite anthem, the Village People’s “YMCA.” 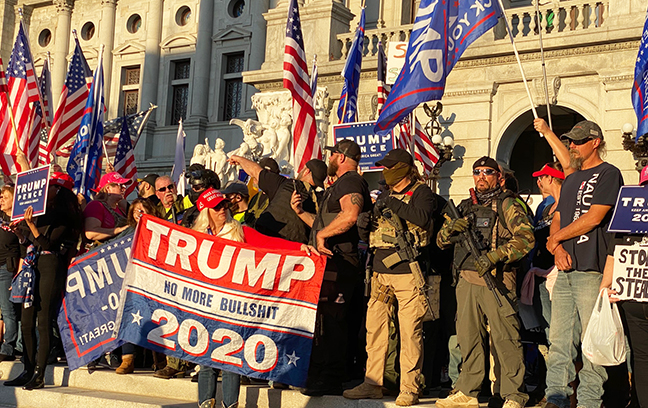 A group of pro-Trump supporters were heavily armed.

Over the next hour, the armed men left together as a group, and the crowd slowly dispersed from the Capitol steps. After about five hours, the competing rallies and confrontations had petered out.

“They lost, and they’re angry about that, and I understand that,” said Deb, a Biden supporter who only gave her first name. “But eventually they’re going to have to face the hard truth that this election is over.”