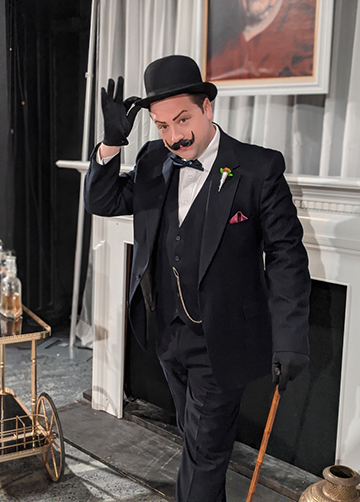 Applause goes to Executive Director Stuart Landon (pictured) for two Herculean feats: 1) for adapting Christie’s short story, “The Adventure of the Western Star,” into a seven-scene stage play, injecting lots of silliness and absurdity, and 2) for managing to keep Poirot’s quizzical eyebrow halfway up his forehead for the full hour he portrayed the signature character.

The play opens with a nod to the audience as intelligent and discerning connoisseurs of detective stories—sophisticated puzzlers with superior reasoning powers. Their characterization and compliments made me feel like an aristocratic MENSA member instead of a tired mom watching a YouTube video in my sweatpants on a Thursday night, eating frozen waffles for dinner.

Told mostly through the narration of Capt. Hastings [Chris Gibson], Poirot’s assistant, the play follows the basic recipe for a whodunit and is heavily seasoned with clever repeat gags. Poirot and Hastings investigate the story of a stolen diamond worth 50,000 pounds called “The Western Star.” Through them, we meet the various suspects who are pulling quadruple duty as quick-change costume artists. Rachel Landon and Benny Benamati showcase how versatile their skills are, playing an assortment of male and female archetypes ranging from femme fatales to a farty hotel clerk.

Much of the character-driven subplot of the play is about Poirot’s personality. He is portrayed as a fastidious boor who approaches investigations in an ordered manner with pomposity and arrogance. Christie created Poirot early in her writing career, wrote about him often and later grew to despise him.

The author herself has the opportunity to voice that opinion when presented as a figuratively and literally flat character. Christie appears as a portrait on the wall, voiced with perfect tongue-in-cheek delivery [Rachel Landon]. In fact, the author wrote an essay about how much she didn’t like the very character she created and then over-used in over 50 of her stories.

Because I only spent an hour with Poirot, I rather grew to like Stuart Landon’s rendition of the fussy chap, wearing his tuxedo while sitting in his flat, looking down his snoot at everyone around him. The repeat gag when Poirot rang a bell and someone immediately brought him a three-tiered tea tray full of sandwiches especially made me chortle. (“Chortle” is a snobbish word for “laugh.” I chortle now because I’m so darned posh.)

The melodramatic music and sound effects [composer Nicholas Werner and guitarist Anthony Pierucci] also become personified as characters in the play, and both deserve an honorable mention. The actors and the music interact with each other, producing a mood of that is simultaneously foreboding, off-kilter and funny. Together, they bring life to the show’s many long-running gags and inside jokes.

The play contains the usual number of distractions produced by being locked down into a video format. Any would-be inconsistencies or mistakes are easily chalked up to being an inherent part of the farce.

If I could make one suggestion to improve this play, it would be to add subtitles to the video. The characters’ accents, hailing from various parts of England, were at times just authentically British enough to require closed-captioning.

If you’re a fan of whodunits and witty British comedy, don’t miss this play. You can view it for free online. During this financially difficult time, please consider sending a donation through Open Stage’s website.

“Poirot Investigates!” runs Nov. 6 to 22 on Friday and Saturday nights at 8 p.m. and Sunday afternoons at 3 p.m. The show can be accessed through the Open Stage YouTube page and on Facebook Live. For more information, visit www.openstagehbg.com.