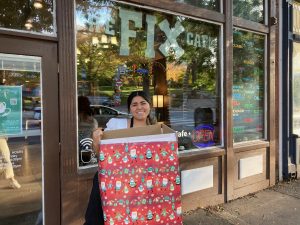 Liz Albayero, co-owner of The Fix Café, is looking for Christmas toy donations for families in need.

What would you do for coffee?

The Fix Café in Harrisburg is hoping you’ll donate a Christmas gift for a child in need in exchange for 25% off a steaming cup.

From now until Dec. 12, the coffee shop is collecting new, unwrapped toys to give to low-income families in the city, explained The Fix co-owner Liz Albayero.

“There are so many kids that aren’t going to have access to Christmas toys because of the pandemic,” she said.

She hopes will people donate with their community in mind, but the discounted coffee is a nice incentive.

“Everyone drinks coffee,” she said. “It’s a way to give back to the community.”

The Fix Café opened during the pandemic and despite the challenges, has managed to make it work. Business has been picking up, Albayero said.

“We were able to survive a whole year because of the support of the downtown Harrisburg community,” she said. “That meant a lot to us and that’s the reason we made it through. That’s why we continue to give back.”

After posting on social media about their “Caffeinated Santa” toy drive, Albayero received a message from Andrea Grove, owner of Elementary Coffee Co. She said that she would love to participate and collect donations at her coffee shop on North Street, as well.

“It meant a lot that another coffee shop wanted to do it too,” Albayero said.

The goal is to collect 60 toys at each drop-off location. The Fix will distribute toys, with help from the Latino Club at Penn State Harrisburg, to children in Allison Hill. Elementary will distribute in Uptown Harrisburg.

Albayero said that they have already received toys, and she expects to exceed the goal.

“I think because of how people have supported us, they will support the kids,” she said.