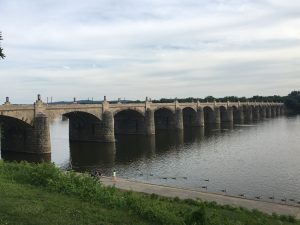 A major Harrisburg bridge connecting the east and west shores is slated to undergo rehabilitation.

PennDOT is seeking community input on a project that will make improvements to the historic Market Street Bridge.

The Market Street Bridge spans the Susquehanna River, connecting Harrisburg to Wormleysburg, as well as City Island in between.

PennDOT plans to rehabilitate the historic arches of the bridge. They will also replace the deck and sidewalks on the eastern bridge and construct a new deck and beams on the western bridge.

A project overview, displays and plans are available on PennDOT’s website for the public to view. They hope to receive feedback from the community through a comment form.

“The Market Street Bridge connects our east shore and west shore communities and is the main access point to City Island,” said PennDOT Acting District Executive Chris Drda. “It is an important project for commuters and pedestrians, and we strongly encourage everyone to visit the project website or join us for the open house to learn about the preliminary plans to rehabilitate the bridge and maintain safety and multimodal access over the Susquehanna.”

There will also be an in-person open house plan display held on Dec. 7 from 6 p.m. to 8 p.m. at Kinsley Hall, 20 Market St., Wormleysburg.

PennDOT is accepting comments on the project until Dec. 22.

They anticipate starting construction in 2024.

While PennDOT has not determined how they will maintain traffic, they stated that access to City Island will be possible throughout construction.

PennDOT can make the project documents available in alternative languages or formats if requested. For this service, or for additional concerns, contact Heidi Mertz, PE, Project Manager, at (717) 787-3324, or email at hmertz@pa.gov.