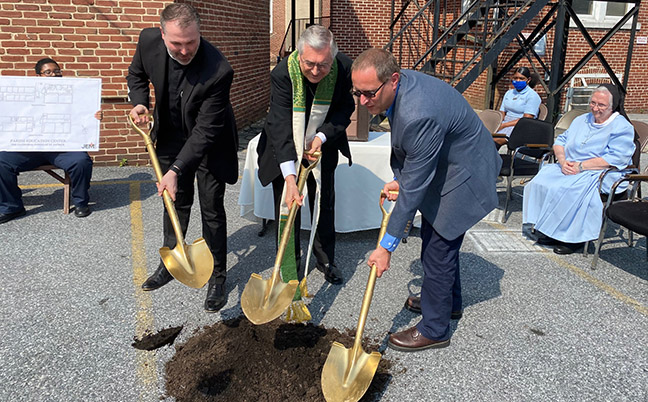 “This is a great day for our parish and for downtown Harrisburg,” Gainer said.

The project will renovate and combine two buildings: the 1951 Harrisburg Catholic Elementary School on Liberty Street and the 112-year-old Shanahan Center on North Street.

The pastor of St. Patrick Cathedral, the Rev. Joshua Brommer, said that the $5.7 million project will proceed in three phases.

The first phase will begin soon—a three-story, 3,250-square-foot addition between the two buildings, which are currently separated by a walkway. The construction phase will combine the buildings and create a new school entryway and house an elevator.

The second phase will follow, turning the Shanahan Center into classroom, laboratory and dining space. A third phase will include the renovation of the existing elementary school building on Liberty Street. 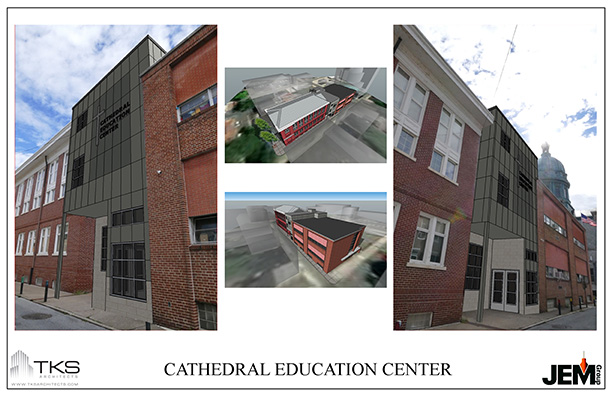 A rendering of the project

To date, the diocese has pledges for about $1.9 million for the project, so will continue to fundraise for the remainder, Brommer said.

When completed, the school will have 10 new classrooms, a STEM lab, art and music facilities and a new dining hall in 26,475 square feet of space.

The project architect is Mechanicsburg-based TKS Architects, with Harrisburg-based JEM Group as the general contractor.

Brommer said that he hoped the entire project would be finished within two years. The campuses would be merged after the completion of the project.

“With this groundbreaking, we unearth a treasure trove of innovation, security, accessibility and a bold, forward visioning that gives us true faith in our future,” Brommer said.

Click here for more information on the Diocese of Harrisburg Catholic schools.