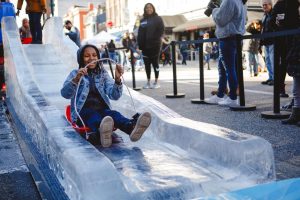 A past Ice & Fire Festival. Photo courtesy of city of Harrisburg

If you can’t beat the cold weather, why not join it?

That’s what Harrisburg plans to do at its annual Ice & Fire Festival, featuring a street festival and display of ice sculptures around the city.

“We are really excited,” said Cortney Ranck-Cameron, the city’s interim manager of special events. “This is an event that the community really loves.”

On Saturday, March 5, the community can view over 50 ice sculptures scattered throughout downtown, Midtown, City Island, Shipoke, Italian Lake and Reservoir Park. Life-sized sculptures will include an ice throne, a Dr. Seuss hat and a Feeding America tribute. Sculptures will be on display from 11 a.m. to 9 p.m. and will be illuminated beginning at 7 p.m.

This year, a street festival will take place on Front Street, from Walnut to State streets. Ranck-Cameron said that it will include community favorite activities like an ice slide, fire pits with free s’mores, fire dancers and performances by local school and community groups. Food trucks and other vendors will also set up shop along Front Street and Riverfront Park.

The portion of Front Street will be closed to vehicle traffic from 8 p.m. on Friday, March 4, to midnight on March 5.

Last year, the city cut the street festival from the program due to the pandemic. Instead, it featured ice sculptures throughout the city and a drive-through event on City Island, calling the event “Ice in the Burg.”

Ranck-Cameron said that they received positive feedback on the event and decided to keep some elements of it this year, including positioning the ice sculptures throughout the city.

In past years, the Ice & Fire Festival has been held on 2nd Street downtown. However, Ranck-Cameron said that they decided to hold it on Front Street to allow for access to parking on 2nd Street.

While visitors explore the ice sculptures, they can participate in a scavenger hunt for the chance to win gift cards from Harrisburg businesses. Each sculpture will have a QR code and participants must scan at least 10 different sculptures to enter the drawing.

“This event is a really great way for people to explore the city,” Ranck-Cameron said.

Visit Hershey & Harrisburg, ExploreHBG and M&T Bank are sponsors of the event.

Organizations wishing to sponsor an ice sculpture can still do so, on the city’s website.

Street parking is free after 5 p.m. on Saturday in the downtown area and free all day on Sunday. Get four hours of free downtown street parking using the code LUVHBG on the Parkmobile app. A discounted $10 daily rate is available at the Market Square Garage courtesy of Park Harrisburg on March 5. Parking on City Island is free. Check the city’s website for parking options in other areas of the city.

A full schedule of events for the Ice & Fire Festival will be released in mid-February, according to Ranck-Cameron.