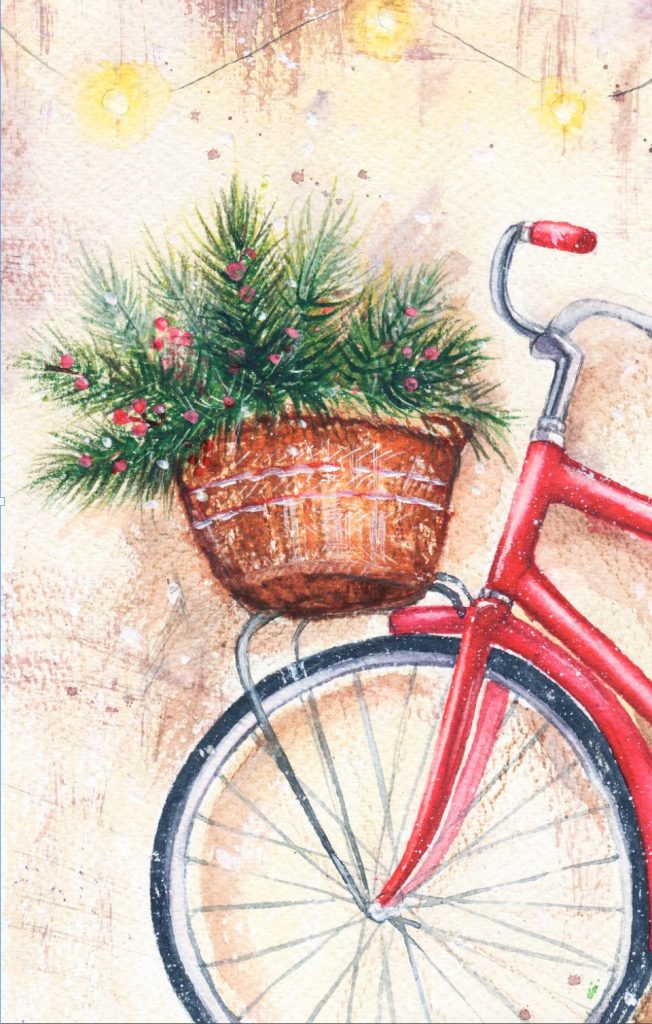 Facebook, maligned by many, can also turn merry. As a Lower Paxton neighborhood group discovered, it can actually be a vehicle for good.

“Initially, I had the Neighbors of Lower Paxton Facebook group as kind of a neighborhood watchdog, but it blossomed into something entirely different—neighbors helping neighbors,” said longtime resident Forrest Healey, 54.

Back in the fall of 2019, one of his neighbors—a woman who had lost her job— turned to that Facebook page for help as the holiday season approached.

“She was concerned about getting clothes for her two teenage kids—let alone anything else,” Healey said. “People came together—it was amazing to see. They helped her with a new job and gifts, and I was inspired by that.”

His Wheels Were Turning

Holiday kindness, especially toward kids, struck a chord with Healey.

“My father left us when I was 7, and my mother raised us on her own. She had to work nights … but one time we all got new bikes,” Healey said. “And my sister—who worked her way up from nothing—she has bike drives out in [my hometown] Las Vegas.”

With bikes on his brain, he floated the idea on Facebook. What did his Lower Paxton neighbors think about launching a bike drive?

Mike Williams and Tiffaney Horner were two of the first people to respond.

“So much of my career is focused on promoting play in children, and a bike is universal,” said Horner, a mother of three who’s worked with medically compromised children for 25 years. “You don’t ever age out of that essence of play.”

“The gift of a bike represents freedom—the first mode of escape, to jump on a bike and be carefree,” said Williams, a father of three who’s a former special agent with the Pennsylvania Office of the Attorney General, Child Predator Unit.

With the goal of gathering 30 shiny new bicycles and distributing them to families in need—just a few weeks after that initial Facebook post—the grassroots group exceeded expectations and provided 51 bikes for the 2019 holiday season. It was a community effort. Teachers at South Side and North Side elementary schools recommended kids in need. Healy matched donors—and predicted bike sizes—with children.

Much like a bike ride itself, their efforts were exhilarating.

“We were just acquaintances and friends, but somebody said we should form a nonprofit so we went down that path,” said Healey, a self-employed electrician who’s also a father of three. “I’m a little impatient, so we just flipped that switch and went.”

Bike a Better Path formed with Healy as executive director, and Horner and Williams serving as president and vice president, respectively. Additional board members and community volunteers are also essential.

Just like riding a bike, the group got right back on board for the 2020 holiday season. They doubled their goal, setting their sights on 100 bikes. Then the wheels fell off, figuratively. The pandemic hit, along with financial concerns and supply chain issues.

“I would definitely say the need grew, but I was genuinely surprised,” Horner said. “Everyone was affected or impacted by the pandemic, but that actually drew more donors to help where they could.”

Bikes were hard to find. The group had a system for scouring area stores, but most often, they encountered empty shelves.

“It was toilet paper, paper towels and bikes,” said Williams, counting the top three most sought-after items at area Wal-Mart and Target stores, on his fingers.

Still, the group once again exceeded expectations in year two by collecting and giving away 164 bikes.

This holiday season, with their newly minted nonprofit status in place, Bike a Better Path is aiming for 300 bikes. If they hit that goal, they’ll have given 500 kids their own set of wheels within three years.

Families can now submit confidential requests directly online. Healy personally reaches back to each and every one.

“It’s the loss of job, COVID, family dynamics, divorce, all kinds of things,” Healey said. “I’ve spent many a time managing it up till midnight, standing at my kitchen island. It’s basically what I do in all my spare time.”

“We all have a soft spot for these kids wherever they come from—we don’t want to say no,” Williams said. “There’s no east shore, west shore rift here. It’s just nice to help those who are less fortunate. There’s no politics, no race or gender issues—we’re just trying to help parents supply bikes for their kids.”

Bike helmets are provided by the American Legion Post 272 in Linglestown, where this year’s distribution days are set for Dec. 17 and 18. That’s when the bikes come out of storage units donated by a local facility. All families receive bike locks, safety rules and a “bike promise” for parents and children to establish rules and responsibility. It takes more than 20 volunteers to make the event run smoothly.

After a year’s worth of work behind-the-scenes—gathering donations, putting bikes together, and hearing about hardships and heartache—there’s magic in the air. Maybe it’s because Bike a Better Path’s mission is “empowering youth through the magic of a bicycle.”

“There’s the excitement and gratitude of the recipients, lots of thank you and tears because they know their child will have a gift,” Williams said. “It takes a village, and this village is an awesome group of people from Lower Paxton Township.”

For more information on Bike a Better Path, see bikeabetterpath.com.