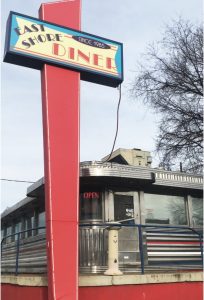 Eggs over easy. Crispy bacon, as only Bill Katsifis, owner of the East Shore Diner, can make it. English muffin. Randy Baratucci takes the elements of his usual order and makes a bacon and egg sandwich.

“Their breakfasts are the best,” said Baratucci from his booth in the cozy diner where, judging by the signage and the jukebox, time stopped somewhere between the Eisenhower years and the Un-cola age.

“Whatever you need, they take care of it,” Baratucci said. “They’re very personable. They have things so nice for their customers. We’re like family.”

People around Harrisburg are raging about the possibility of tolls, lurking ogre-like at the ends of a widened South Bridge. But a separate Capital Beltway expansion project is poised to reshape the commercial corridor driving through the heart of Harrisburg.

The East Shore Diner on Cameron Street sits squarely in the path of the plans. Since Katsifis and his late father bought this classic chrome diner in 1985, generations have trooped in for camaraderie and good food.

“You follow the American dream,” said Katsifis’ wife and diner co-owner, Dorothy Katsifis. “You try to own your own business. You support your family and your kids.”

But the PA Department of Transportation, the couple says, can’t find a property that would allow them to continue their business uninterrupted.

PennDOT began its multi-phase expansion of the Capital Beltway several years ago. The recently widened I-83, around Union Deposit Road, is the tail end of the first phase of the $1 billion project to remake the east shore and river sections of the highway.

Several more phases are pending. A plan to add lanes and rework interchanges from the Susquehanna River to 29th Street right through the city of Harrisburg is in final design, with construction bidding anticipated in August 2023, according to PennDOT.

Construction of this stretch, labeled “Section 3,” is expected to begin in 2024, with the first contract completed within three years. All components—utilities, right of way and construction—are expected to be done in 10 years, according to PennDOT.

Because engineering began, first, for Section 3, and then for the South Bridge, a “small portion” of Section 3 would require redesign to accommodate the South Bridge widening, said PennDOT spokesperson Dave Thompson.

Property acquisitions are “ongoing,” he said.

Corby represents about 13 property owners “just in that section.” One has already won a ruling in Dauphin County Common Pleas Court that PennDOT’s unveiling of the project, in compliance with federal law, constituted a “de facto” taking of his property—not legally acquired through eminent domain but depriving the owner of fair market value after potential buyers bailed out.

“Obviously, this shows the property was unmarketable generally,” said Corby. “Its marketability was affected by eminent domain.” PennDOT is appealing the ruling.

At the East Shore Diner, surrounding properties are untouched or partially affected. The diner—and, more importantly, the lot it occupies—is directly in the path of construction. As real estate prices soar, finding a comparable lot, at a price that PennDOT is willing to pay while allowing business to continue and not forcing Katsifis to take out a mortgage, has become a stumbling block.

The owners were promised “a key for a key,” said Dorothy Katsifis.

“We knew it was coming, but not like this,” she said. “We thought we were going to be taken care of and they would help us. What we have is what we want. That’s the main thing. We have a parking lot. We want a parking lot.”

Katsifis worries about losing her customer base, although the loyal patrons filling the booths on a crisp Tuesday morning swear they would follow the East Shore Diner wherever it goes. It’s the kind of place where the morning crowd has its “assigned” seats and gives grief when buddies take them, said Baratucci, of Paxtonia.

All the customers lament the uncertainty heaped on the owners and the possible loss of their “everybody knows your name” place.

“They’re just kind of hanging there,” Baratucci said of the Katsifises. “Every time you get a little news, it seems more negative. I just think it’s such a shame that PennDOT can’t work something out.”

Daily customer Richard Wright, of New Cumberland, calls the East Shore Diner “the best diner in central Pennsylvania, and I’ve eaten at every one of them.”

“I know things happen and life gives us changes, but I think they’re taking away from Bill and his family the opportunity to still earn money,” Wright said. “This man has to earn a livelihood. He’s not retirement age. If you buy him out, he should be paid potential earnings, or they should buy the business and move it like they said they would to another location.”

Eminent domain “always comes down to money,” said Corby. What’s called “just compensation,” as required by law, is often the difference between the government’s lowball estimate and the counteroffers developed by appraisers who take disruptions to livelihood and lifestyle into account for the property owners.

“Your estimated just compensation might not be adequate to get me moved into a comparable property in this market,” said Corby. “Even if it was, oftentimes, you can’t find a property that was exactly like the one you left.”

As cases drag through negotiations and possibly courtrooms, business owners can be pushed into limbo. A PennDOT policy to withhold the full amount of compensation due to liens, instead of holding just the lien amount in escrow, has ensnared Lamont Palmer. He left his used-car business on Paxton Street but hasn’t received any of his $210,000 compensation due to $12,000 in liens, including a $10,000 claim against a long-ago former owner.

While Palmer petitions the court to retrieve the non-encumbered remainder, he is sidelined while the market in used cars sizzles.

The I-83 expansion is expected to touch on two Capital Greenbelt junctures, including the stretch along City Park Drive, that wild, winding lane linking Paxton Street to Derry Street from, say, Faulkner Subaru to the Paxtang Grill.

There’s a pinch point there, at a perfect storm of I-83 overpass, railroad tracks and waterway.

“It’s one of the areas where, as a user, I’m always nervous for people because you’ve got to be careful,” said Capital Area Greenbelt Association President Mike Shaull. “There’s not a whole lot of room to navigate.”

PennDOT had the foresight to reach out to CAGA, said Shaull. Now, that pinch point could be improved with sidewalk enhancements and a walking bridge more substantial than the sturdy but aging crossway fashioned from railroad ties.

Shaull is especially excited by the prospect for a restroom and parking at the spot where I-83 meets the Greenbelt at Front Street, approaching the PennDOT building.

“Outside of private businesses opening their doors up, there are no public restroom areas on the Greenbelt,” said Shaull. “That’s something that’s often asked for. It would be really nice to see that come to fruition. We’ve got our fingers crossed.”

Harrisburg is “creeping up on lists of great places to live or retire,” and a safer, more easily accessible Greenbelt is one more asset in the city’s favor, said Shaull. As the pandemic showed, the Greenbelt is “a lifeline for people.”

“Some use it for commuting, some use it for recreation and exercise, communing with nature, or meditation from the chaos of the everyday world,” he said.

Local bicyclists see mixed blessings in the bridge plans that include shoulders for bicycles. Bicycling policy advocate Jim Buckheit said that PennDOT has been “receptive” to suggestions for bicycling infrastructure.

“It encourages and supports people using something other than a car to travel,” he said.

Buckheit and others remain concerned, however, that the capital region’s foot and pedal accommodations are behind the times and, when attempted, done in piecemeal fashion. Widening bridges only encourages motorists to drive faster, diminishing safety for people on foot or pedaling, said Ross Willard, founder and chief mechanical officer for the nonprofit, Recycle Bicycle.

“Why do we keep segregating the south side (of Harrisburg), making the highway wider and wider?” he said. “I-83 is a great wall of cars.”

Back at the East Shore Diner, longtime customer Barry Tolby says he bypasses restaurants on the way from his Newberry Township home because “you get your money’s worth.”

“There’s no other restaurant around that serves the type of sausage they have here,” he said. “It’s a foot long. I have to pig out. I get two of them. I’ll be needing some kind of transplant pretty soon.”

As for the circumstances surrounding eminent domain, “I think it sucks,” Tolby said. “I hope they don’t get screwed on the whole thing. It’s hard to find a place to actually move this diner to.”

Yes, the building can move, but a noncomparable relocation would diminish the viability of a historic property—circa 1950s, from the Jerry O’Mahony Diner Company—that houses a functioning business, said Historic Harrisburg Association Executive Director David Morrison.

Historic Harrisburg plans to place the diner on its list of preservation priorities, to be presented in January.

“Until it’s repositioned and back in business somewhere, its future is somewhat in question,” Morrison said. “It’s a wonderful, viable business, and its loss would be of equal concern to many of Historic Harrisburg’s other preservation priorities. I don’t think it would cease to be a priority until it’s at a place where it could continue to operate long-term.”

Dorothy Katsifis and her family remain hopeful but wary about the future and the possibility of finding a comparable property for their diner. Despite the protestations of loyalty from customers, she fears that a move would leave them behind.

“There is hope, if we find something,” she said. “I don’t know what we’re going to do. How do you know? We’re not going to have the same customers. How do you start again? It took 30-some years to do this.”