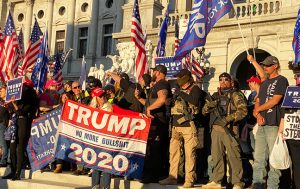 A pro-Trump rally at the PA Capitol in November.

This week, Harrisburg braces for what could be marching into town this weekend, after talk of armed protests at state capitals surfaced online.

“We are coordinating with the Capitol police and police in the surrounding municipalities and will be ready for whatever comes our way this weekend,” said Mayor Eric Papenfuse.

Blake Lynch, director of community relations and engagement for the Harrisburg Police Bureau, said they have heard talk of possible activity in the city. A memo from the FBI confirmed there are plans in all 50 states, reported the Washington Post, which also said that there was information suggesting people may storm government offices.

Lynch said that police at the local, county, state and federal levels are in communication.

“We are experienced with demonstrations and protests, including armed protests,” Lynch said. “The mayor and commissioner are taking it extremely seriously.”

Troy Thompson, a spokesperson for the PA Department of General Services said that special response team members from the Capitol police have been patrolling the building.

“We have raised the visibility of the Capitol police,” Thompson said. “We will monitor the situation and make sure the appropriate resources are on hand.”

There have been frequent protests and marches in Harrisburg over the last nine months. Most have been peaceful, though several have had tense moments, including an April “Reopen PA” protest that gridlocked city streets, a Black Lives Matter march in late May that saw conflict between some protesters and police and a November post-election protest, during which Capitol police separated and stood between opposing sides.