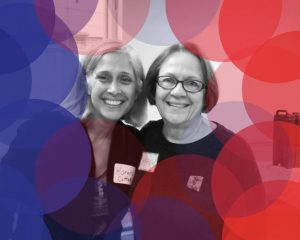 Nov. 4, the day after the presidential election, could be the most divisive day in modern U.S. history.

That’s according to a nonprofit organization called “Braver Angels.” But they’re flying in the face of adversity.

“Immediately after the election of 2016, 17% of Americans surveyed by Reuters said they’d severed relationships with family during the election,” said Linda Beck of Harrisburg, the first Dauphin County member trained as a Braver Angels moderator. “It’s along those lines, because we’re so polarized, that we tend to see things as black and white, and are very quick to end relationships over politics. So, there’s an assumption that things could be as bad or worse after this election.”

Beck became a member shortly after delivering a TED Talk on the importance of fact-checking amid our social media-driven world. She was looking for resources to help her combat declining civility in everyday conversation, both online and in-person.

Speaking of the Civil War, the organization reached back to 1861, to the words of Abraham Lincoln, to find the right words and name to capture their intent. Lincoln, facing the daunting task of healing the country following the secession of seven states from the Union to the Confederacy, delivered his first inaugural address by imploring Americans “not to be enemies,” and appealing to the “better angels of our nature.”

Braver Angels was founded shortly after the 2016 election with the mission of uniting red and blue Americans to depolarize them. The organization defines polarization as the “gap between ideological viewpoints,” as well as the “increasingly negative emotions and attitudes toward those in the other political party.”

But political labels are neutralized by referring to members in terms of colors—red and blue.

“I believe that was an attempt to get away from liberal and conservative labels which tend to have emotional reactions or baggage,” Beck said. “It’s a step away from that—part of the depolarization effort is to help people get away from seeing people through labels. Because no matter which side you’re on, you likely have more in common than you think.”

Beck and all Braver Angels in leadership positions are volunteers.

“It’s a big labor of love,” said Beck, an adjunct professor of business communications at HACC.

She recently helped create the Braver Angels ambassador toolkit for members’ nationwide use.

Spring and summer workshops were planned as a way to bring reds and blues together. Beck was set to host Dauphin County’s first one in March, when the pandemic forced cancellations. Events have shifted to online platforms nationwide and statewide.

Karen Cotter of Bloomsburg is Braver Angels’ state coordinator for the eastern section of the state. With a background in dispute resolution and social work, she wanted to help mend her community’s contentiousness.

So she wrote a letter to the editor, published by the local newspaper.

“I asked if anyone in the area was interested in getting together to talk about the political divide,” Cotter said.

A handful of people responded and showed up. One of them was Karen Ward, also of Bloomsburg. Cotter identifies as “blue,” while Ward is “red.”

“But we’re both dedicated to the mission of Braver Angels, and we’ve become friends in the process,” Cotter said.

The similarities don’t end there. They both have the same middle name (Jean), both of their husbands are named John, and they both have October birthdays (almost exactly 10 years apart).

Despite having opposite political views, their friendship serves as a model for Braver Angels’ programs, including “Depolarizing Within” workshops.

“With Malice Toward None,” borrowing a line from Lincoln’s second inaugural address in 1865, is a new initiative, born out of the COVID-19 landscape. Its online materials are designed to serve as templates for civic organizations, churches and other groups to guide online or in-person meetings and build community.

“I know how difficult it is to be involved in anything when you have a full-time job, but the one thing I’d tell somebody is, for $12 a year, you get access to all the information on the website—our workshops, the training available online—it would help in the political climate that we’re in right now,” Ward said.

“The alliance that came from people who participated—they could see there were people willing to listen and able to understand the other side,” Ward said. “They were hugging before they left.”

Cotter and Ward have discussed issues including race, policing, LGBTQ+ rights and guns.

“Being able to pick each other’s brain and trying to understand, without the yelling part,” is how Ward describes their conversations.

They both encourage Pennsylvanians to become Braver Angels.

“It’s important, as a battleground state, to have as many folks as possible involved,” said Cotter. “Sometimes, people are reticent to be involved in an organization that deals in conflict, but we think it’s important to build relationships because of the contentious nature of this year’s elections—and those kinds of bad feelings may continue long after the election.”