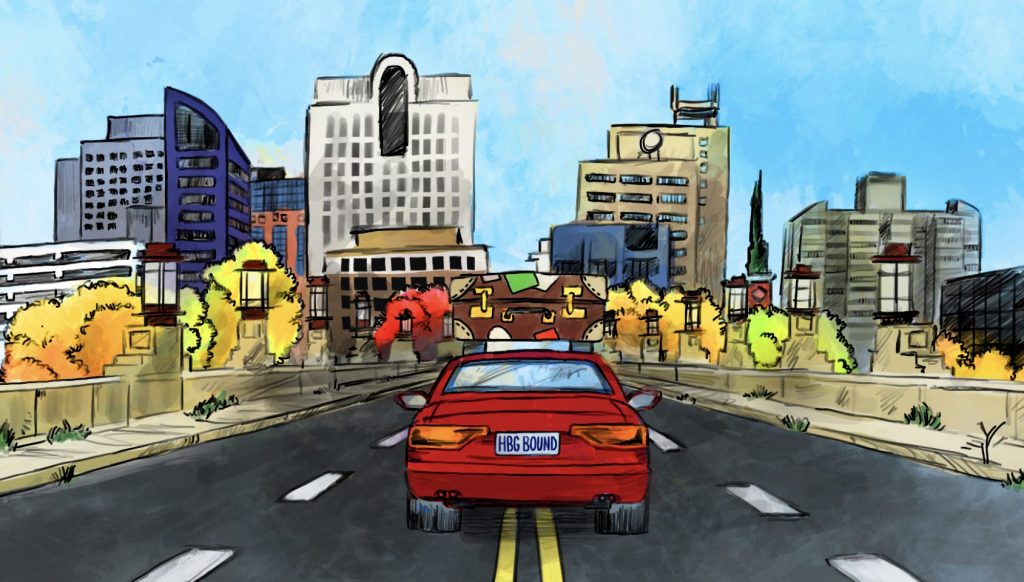 Aliyah Graves-Brown loved her row home in Washington, D.C. She lived with three friends and had her own room.

She was in D.C. for about nine years, going to school and then teaching at Georgetown University. It was her home, and the big city had so much to offer.

That is, until the COVID-19 pandemic hit, and her personal D.C. shrunk to the size of her shared house.

“The pandemic is impacting big cities in a way that doesn’t make them feel the same,” Graves-Brown said. “Being in D.C. doesn’t really matter if I’m in my home most of the time.”

All of the big city amenities that drew her in weren’t as accessible anymore. Not to mention, she was working her job remotely.

Graves-Brown works as the program coordinator for the Prisons and Justice Initiative at Georgetown University. Before the pandemic, she would regularly take trips to the D.C. Jail for her job. For months, she hasn’t been able to do that.

“I had to think through what the future looks like,” she said.

Graves-Brown decided it was time to find her own one-bedroom apartment and come back to where she grew up—Harrisburg.

“I’m excited to have a space that’s mine,” she said. “But I definitely wouldn’t have moved back to Harrisburg if it wasn’t for the pandemic.”

He has met a number of people moving out of cities like Philadelphia, New York and D.C. to come to Harrisburg. Some are moving for jobs, some because they can now work remotely, and others for family.

But this isn’t just a few out of a handful. This is a phenomenon many professionals in the real estate business are seeing.

In Philadelphia, rental prices have dropped by 6%, with some landlords even offering rental concessions—negotiating changes to a tenant’s original lease in an effort to keep them, said Meghan Okonsky, an Apartments.com representative for the Philadelphia and central Pennsylvania areas, including Harrisburg.

On the other hand, nearby, smaller cities like Harrisburg have seen residential demand rise, Okonsky explained. According to data from Apartments.com, apartment vacancies in Harrisburg (defined as places with a Harrisburg address) stand at just 3.6%, compared to 6.8% nationally and 5% in Harrisburg at this time last year.

“Philly is struggling, but places like Harrisburg are thriving,” she said.

Like Graves-Brown, Brittnay White wouldn’t have made the choice to move out of the big city if it weren’t for the pandemic.

She and her son lived in a house in Queens, N.Y., and she loved the area.

But White missed her family, who mostly lived in Harrisburg. When some family members contracted COVID-19, it put everything into perspective for her. She knew it was time to move back.

Because she was working mostly remotely, the decision became much easier.

“I had been thinking about moving closer to family, but there was nothing pushing me,” White said.

White and her son are moving into Olde Uptown this month. She’s nervous for the transition to a smaller city, but knows she made the right choice.

“I feel like Harrisburg is really catching up to speed,” she said.

Not to mention all the money she’s saving on rent.

“We continue to see a high number of our residential tenants coming from out of state,” said Brad Jones, president and CEO of Harristown Development Corp.

He said that he’s encountered numerous people moving to Harrisburg because they can work remotely.

“We have a tremendous value proposition here,” Jones said. “You can save money and have a higher quality of life.”

In fact, Harrisburg recently was named one of U.S. News and World Report’s “2020-21 Best Places to Live.” Out of 150 top metro areas nationwide, the city placed 51, the highest-ranked city in Pennsylvania.

Not only is Harrisburg a place where more people want to rent, but Hoover has seen an uptick in home sales, as well. The data supports his thesis.

According to the Greater Harrisburg Association of Realtors, area home sales have shot up since pandemic-related restrictions on the housing industry were lifted in late spring. For instance, in September, residential sales for the three-county region rose 19 percent compared to the same month last year, while the median sales price increased by 11 percent.

Hoover said that people are realizing that they can buy a house here for a fraction of the price of larger cities, a big selling point when you can work remotely yet still be an easy drive or train ride to several large metro areas. Meanwhile, he believes that remote work won’t end when the pandemic does.

“The working from home trend is not temporary,” Hoover said. “It’s permanent.”

Doug White lived in Brooklyn, N.Y., for about 13 years, before recently taking a new job in Harrisburg. Out of three location options from the company, White and his partner landed on Harrisburg.

White’s move may have been for a job, but he knows many friends from Brooklyn who left before him because of the pandemic.

“There’s a mass exodus from New York,” he said. “People are breaking their leases.”

Like Graves-Brown, White attributed the “mass exodus” to the closure of many urban amenities, such as restaurants and cultural venues, coupled with often sky-high rents in New York.

“When all that is shut down, what’s the point of paying all this money?” he said.

That isn’t to say Harrisburg doesn’t have amenities like the bigger cities, explained David Black, president of the Harrisburg Regional Chamber & CREDC.

“People like the urban feel, but it’s a smaller urban feel,” he said.

He mentioned the easy access to the Broad Street Market, restaurants and retail.

Black said that, with more people moving to Harrisburg, demand for more amenities will increase, which could lead to additional retail and restaurant options.

So, if you’re looking to move, go ahead and check Zillow or Apartments.com, but best of luck. Things are moving fast.

For more on the Harrisburg Regional Chamber & CREDC, visit www.harrisburgregionalchamber.org.