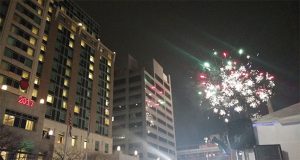 This year, Harrisburg is hoping residents ring in the new year at home.

The city’s in-person New Year’s Eve celebration was dropped this year, due to the COVID-19 pandemic. Instead, they’re opting for a virtual celebration.

There will be a virtual countdown to midnight featuring “iconic Harrisburg locations and organizations,” the city’s website said. They are inviting members of the community and businesses to submit short videos to be included.

There will be no live fireworks, but rather, a video compilation of fireworks from past years.

On Harrisburg’s website, families can reserve free balloon drop kits to celebrate with at home. There will also be a countdown video for the kids, featuring the Harrisburg Senators’ mascot, Rascal.

Harrisburg will compile a list of local restaurants’ dining and takeout options, as well as any specials they are running for the holiday, Megan Roby, the city’s director of special events said.

The event is sponsored by Visit Hershey & Harrisburg, Explore HBG and the Harrisburg Downtown Improvement District.

In past years the city would celebrate New Year’s Eve with a large gathering downtown, including music and dancing. The tradition was to drop a giant strawberry from the top of the Hilton Harrisburg, followed by fireworks.

This year, COVID changed the plans, as it did to many of Harrisburg’s other holiday celebrations. Most recently was the Reverse Holiday Parade on Nov. 21. In their vehicles, spectators drove by parade participants stationed on City Island.