On a crisp autumn afternoon, mums brighten the charming homes of Montrose Street.

Two girls step off the school bus and head home. Pickup trucks halt respectfully at the four-way stop signs. An elderly homeowner leans on a rake, chatting with the mailman.

Welcome to another idyllic day in Montrose Park.

One of Harrisburg’s original suburbs has long been a haven of serenity, but now, residents say, their unified opposition to a proposed development has refreshed their sense of community. The disputed project’s outcome remains in doubt, but all agree that they are forging new friendships and neighborly ties.

“I’m starting to meet people who I didn’t know where they lived, and now I do,” said long-time resident Jeb Stuart. “I’ve been to their homes. I’ve had them to mine. It’s been a really cool thing, where the neighborhood has come together around the banner of Montrose Park as an identity.”

“It’s a perfect case of ‘adversity brings a community together,’ because that’s what has happened,” agreed resident Ray Davis. “There’s good that has come out of all of this.” 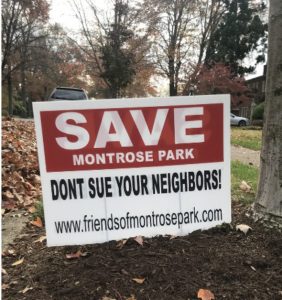 The last of the pre-Great Depression mansions of Harrisburg line the Susquehanna Township portion of N. Front Street. Today, many are offices. Behind this grand façade are the leafy, pre- and post-war blocks of Montrose Park, just over the city line.

The Susquehanna Township neighborhood was born when the Herre brothers, local contractors, sold lots and built homes for their workers. When the Jewish Community Center moved from Midtown Harrisburg to Montrose Park in the 1950s, many Jewish families followed.

Montrose Street forms the spine of the neighborhood. A narrow, vacant, star-crossed lot occupies the Front Street end and juts into the residential area. Like a toothless smile, this lot stands out for what was lost—a substantial home built in the 1920s and demolished in 2014.

Linlo Properties partner Lowell Gates defended the use of the site for dialysis—easily accessible and only minimally impactful on traffic, he told TheBurg—and said he revised the building’s design to suit Front Street’s historic vibe.

In the residential blocks, however, neighbors sounded the alarm. Traffic, parking, flooding, medical waste were all cited as concerns. They perceived a mismatch with “Sustainable Susquehanna 2030,” the township’s comprehensive plan.

On Aug. 27, the Susquehanna Township Board of Commissioners unanimously rejected requested waivers and the entire proposal. Riveroaks has appealed, so the proposal remains in play.

The yard signs were unlike anything ever seen in these sedate parts, spiked along curbs like hobnails on a boot:

“They said nobody walks here.”

Then there was the change.org petition and the resident appearances at township meetings. A new Facebook group, Friends of Montrose Park, rallied neighbors with updates.

By August, in the midst of the fight, new-ish resident Debbie Tramontin and other movement leaders had a stress-relieving idea. Why not hold a block party? Close Montrose Street. Set up tables. Haul out the grills. The morning of the event, neighbors “were popping in and out of my driveway saying, ‘Do you need tables? We have more chairs,’” said Tramontin. “Someone pulled up and brought a tent.”

Lifetime Montrose Park-er Tim Patterson joined the gathering just by stepping out of the Cape Cod home designed and built by his father in 1937. As the party ended, he told Tramontin, “This is the first time I ever sat in the middle of Montrose Street and had lunch.”

Whether longtime homeowners or new, residents agree: Montrose Park has grown closer—a change from the neighborhood where “other than the guy next door or the family across the street, you really didn’t know your neighbors,” said 20-year resident Linda Louden.

At the block party, Louden met an elderly neighbor looking for a walking partner. They now walk the streets of Montrose Park as they “jibber-jabber about everything,” she said. They swap recipes and talk about grandchildren. When Louden was getting estimates for a new roof, they critiqued roofs of the houses they passed.

“She’s a very sweet, adorable 84-year-old, and she’s in pretty darn good shape,” said Louden. “I made a new friend, and she’s getting more walking done. It was really great, and it all came from our little block party.”

Eclectic and diverse in people and architecture. That’s what 35-year resident Sam Levine loves about Montrose Park. He and his wife moved there from Midtown because they needed more room without losing that city feel.

Residents have long known their neighborhood is unique, but the dialysis center controversy “made people realize we’re taking something for granted,” Levine said. “Everyone kind of banded together with the cause that they wanted to preserve the special-neighborhood feeling we have.”

“We’ve begun to feel we have this body of knowledge at our fingertips,” said Tramontin. “If you have a question about almost anything, I can probably give you the name of a person in our neighborhood who has knowledge around it.”

Then he added perhaps the most important part.

Although the fight is now in the courts, Friends of Montrose Park plans vigilance, said Tramontin. Residents might take turns attending Susquehanna Township meetings, prepared to issue alerts about the proposed development and anything else affecting the livability of Montrose Park and beyond, such as sidewalks that take people to work, school and worship.

“We want to be listening not just for our neighborhood but all over the township,” Tramontin said. “Not everybody is going to have time to go to meetings, but when they know what’s happening, they do really care and want to be a part of it.”

When Montrose Park residents talk about their neighborhood controversy, the term “silver lining” comes up.

“Once a neighborhood comes together, it has a brand and a commonality to it,” said Stuart, who lives in the Front Street home built by his grandfather in 1927. “This is kind of a watershed event, and, hopefully, we will coalesce and bond together in the future—not just because of controversial projects but just because we’re all neighbors.”

Even conversations among the daily dog walkers are different, Davis said.

“You know people well enough, so you have some common ground to talk about things other than the weather,” he said.

The first block party set the stage for a new sense of community, and there are probably more to come, said Tramontin.

“We didn’t talk much about what was going on,” she said. “We just had fun. We decided that whatever was going to happen with respect to (the development), we are going to work hard to keep our neighborhood wonderful and keep people together as a community and have fun no matter what.”