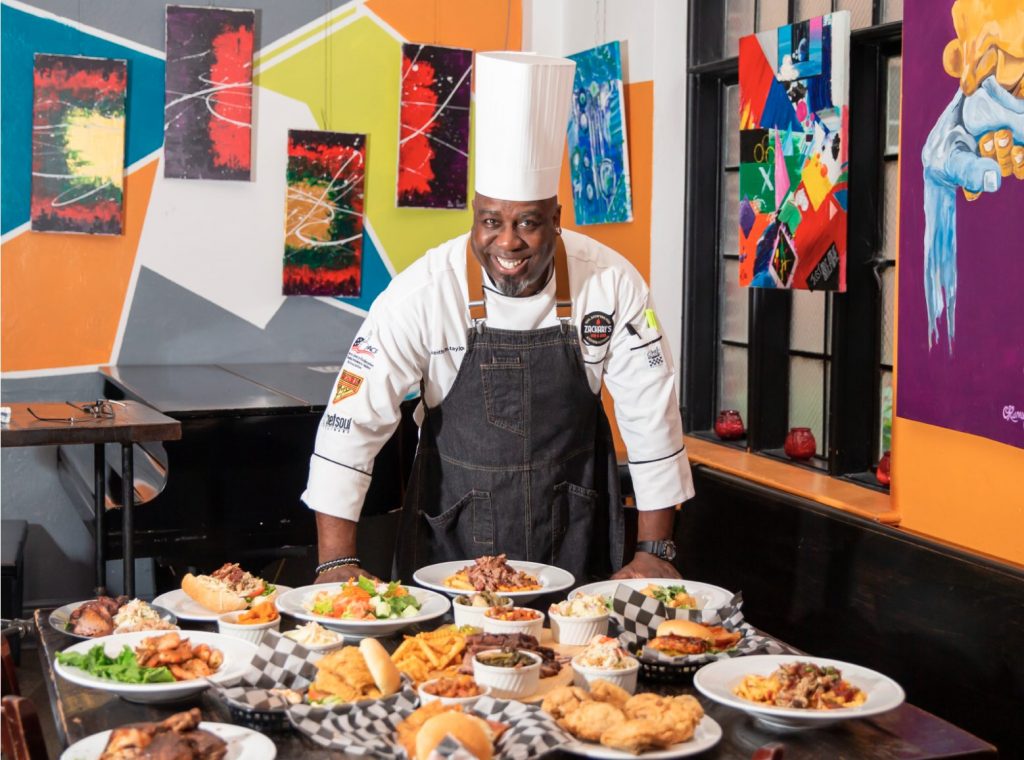 Chef Keith Taylor has been all over the place.

He studied culinary arts and worked at several high-profile restaurants in New York City. He served as a chef at Disney’s Grand Floridian Beach Resort in Florida. He also worked for the former Meadowlands Arena in New Jersey, creating menus for the venue that once housed professional basketball and hockey teams.

Even with all of that experience and traveling, when Taylor visited Harrisburg for the first time, he fell in love.

“I knew nothing about Harrisburg,” he said. “But when I saw the Capitol building, I was like ‘wow.’ But what was more intriguing to me was that I saw new business.”

Taylor toured H*MAC and decided to set up shop in the kitchen, bringing his newest venture, Zachary’s BBQ & Soul, to the city.

Harrisburg isn’t just another location—it’s the flagship location for Zachary’s, Taylor explained. He has high hopes to make Zachary’s a nationally known soul food chain, what he believes will be the first of its kind.

Read over the menu for Zachary’s, and you might feel your mouth begin to water at the sound of buttermilk biscuits, barbecued pork ribs and maple mashed yams. But the food is more than just delicious cuisine to Taylor—it’s family, and it’s American history.

“Soul food is something to be shared,” he said. “This food is love.”

Taylor grew up in a “food-centered family,” one part Caribbean, one part Southern with a generous dash of Italian influence from his hometown of Nutley, N.J. He grew up around a range of flavors, including lots of soul food.

“I didn’t want to be a suit. This is my power suit,” he said, gesturing to his white chef’s coat and hat.

In addition to Disney and those New York restaurants, Taylor worked for HEI Hotels, overseeing operations at 23 properties—a dream job. He even made appearances on reality cooking shows and said that he and roving celebrity chef Guy Fieri are buddies.

But Taylor began to realize that he was ready to pursue a new passion, even if it wasn’t as glamorous as his previous high-profile positions.

“I had nothing left to prove,” he said. “I decided to showcase the food of my parents and my hometown.”

Taylor set out to bring the “most underrepresented” food, soul food, to the mainstream for consumption.

He explained how cultures that immigrated to the United States brought their foods with them, most of which have now been commercialized. For example, Italian food is served at places like Olive Garden and Carrabba’s, and Chinese cuisine is at P. F. Chang’s and Panda Express.

“But the food that is at the foundation of America, the only indigenous American food, is the food that is made by African American slaves who have been in America since 1619,” Taylor said. “Why is it not at the forefront? It was never once celebrated like the other foods.”

That’s why Taylor created Zachary’s, named after one of his sons. He has crafted a menu that showcases the best of soul food— jambalaya, dirty rice, baked mac and cheese and Hoppin’ John, among other dishes.

“If I have to be the soul food messiah, I will be,” he said.

When John Traynor, co-founder and creative director of H*MAC, tasted Taylor’s food, he thought, “This could really work.”

For the past five years, H*MAC has been trying to figure out how food fits into its business. Most music venues stick to serving quick and easy fast food—chicken tenders, fries, etc.—but Traynor said that they had a different idea. Unlike other venues, H*MAC would be open throughout the week. So, they wanted a fuller, more unique menu.

While they had food before Zachary’s opened, they had trouble getting the word out that they weren’t just a venue, but a restaurant. When Traynor heard what Taylor was looking to do with Zachary’s, he knew this was a partnership that he couldn’t pass up on.

“What I loved was the fact that it was soul food barbecue and his take on it,” Traynor said. “It brings diversity in the food culture.”

He added that customers have loved Taylor’s brunches and special event menus for shows.

“Besides the culinary, he’ll bring a lot to the community,” Traynor said. “He’s all about community outreach.”

Zachary’s and H*MAC are running an internship program for people interested in culinary arts. As young as high school students are accepted, Taylor said. They will train under him and his sous-chef.

Taylor also makes it a point to create a positive environment in his kitchen.

And his wages support that. All employees start at $15 an hour, he said, and all tips are pooled.

“Gracious hospitality is at the core of what we do,” Taylor said.

As Zachary’s continues to grow, with locations planned to open soon in Allentown and Norristown, Taylor holds onto that value. Ultimately, he hopes to see the business bring recognition to soul food—a cuisine that he believes has been underrepresented.

“We are creating this little renaissance,” he said.