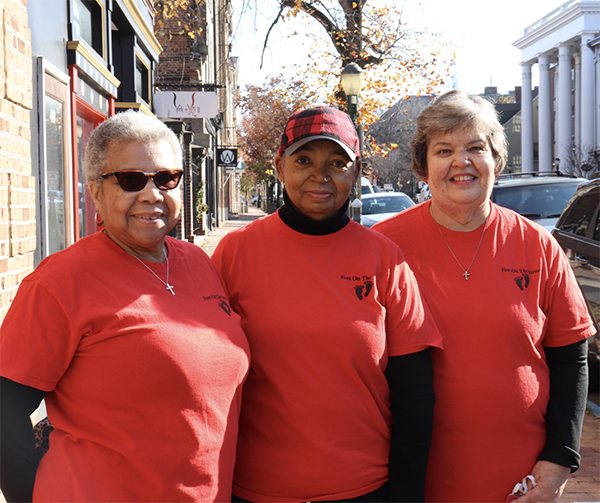 For nearly 30 years, Marian Elby has been a regular visitor at central Pennsylvania prisons.

“People need someone,” said Elby, 77. “Ever since I was little, I had a heart for those who didn’t have.”

Two friends joined her prison ministry program at the Cumberland County Prison twice a month for the past three years—Kathleen Niedermayer, 71, and Martha Thomas, 69. All three women are Carlisle residents.

Back in March, COVID-19 stopped their prison ministry in its tracks—but not for long.

“We don’t let much grass grow under our feet,” said Niedermayer, of their grassroots efforts.

With restrictions in place, halting visitations to prisons amid the pandemic, the three friends prayed for a new way to help others.

Elby, who spent the first 50 years of her life in Harrisburg, was in the city when inspiration struck.

“I was downtown, when one woman caught my eye. She was homeless, sitting on the steps of a church, and I just knew we had to do something,” Elby said. “She just looked so sad sitting there, that I ended up crying—she touched my heart.”

She formed a plan with her friends—a plan to collect warm gloves and hats for the homeless. Then they put out the word. Friends, businesses and church members responded, and soon the three women had a collection of 30 hats and 30 pairs of gloves—plus about 30 blankets and 30 pairs of thermal socks.

The timing was perfect—fall temperatures were about to dive and winter was approaching. So, they made the rounds and visited several area churches and locations where they could connect with the homeless, including Harrisburg’s Market Square on a sunny but brisk Saturday in October.

“Handing out gloves, seeing their faces and smiles, saying, ‘This is a gift—this is something we want to help you with,’” Thomas said, “It’s a way of serving and ministering to them by giving them something tangible that tells them someone is thinking about them.”

And the three friends even saw the woman who sparked Elby’s idea.

“I called out to her, calling her ‘my friend,’ and she smiled and said, ‘Hi friend,’ right back,” Elby said.

Two brothers, currently living out of their car in Cumberland County, met the women at a socially distanced homeless ministry at St. Stephen Lutheran Church in New Kingstown.

“The hats and gloves are a big help, especially during the colder nights,” said Jim, one of the brothers.

And while the women appreciated hearing the kind words, they’re really listening to a higher calling.

Their actions caught the attention of Taro Landis, chief of police at the Carlisle Police Department. He dubbed them, “Carlisle Citizens Who Care.”

“They’re just a remarkable group of people—they put their money where their mouth is, as well as their time and their hearts,” said Landis.

He recalled how the women recently brought lunch to the 32-member police department.

“They cared enough about the cops and went out of their way to say thanks, during a time when some people were saying bad things about the police,” Landis said.

Their kindness didn’t end there. At the station, the women met several people who had been victims of a crime.

“These three wonderful women prayed with them. It’s very impressive that they take the whole idea of being Christian and Christlike a few steps further,” said Landis.

Niedermayer, who is certified as a chaplain, said their friendship is more like a sisterhood that “supersedes” their different races.

“We’ve just naturally all come together as friends, as sisters in Christ—it’s a whole different level of relationship,” Niedermayer said.

Elby said that she developed her ability to talk to everyone and anyone during her 28 years as a receptionist for the Pennsylvania governor’s Office of the Budget.

“I loved my job, because the Lord used me even on the telephone,” Elby said.

Thomas is a retired daycare provider—but she doesn’t think of retirement as a time of rest.

“I don’t want to sit at home,” Thomas said. “God is placing us where we’re needed—our instructions come from him.”

As for their next project, the women are focusing on spreading holiday cheer. They’re accepting donations of homemade, bagged Christmas cookies they can give to the homeless.

“There’s a humbleness about this—I would never stand up and say, ‘Look at me,’” Niedermayer said. “But the reason we agreed to this story is so that we could encourage people to pass it on. All of us have the ability to reach out to another person. So, if I can be a spark, let me be a spark.”

To donate homemade, bagged Christmas cookies to the women’s holiday outreach efforts, contact Marian Elby by emailing her at marianelby98@gmail.com.