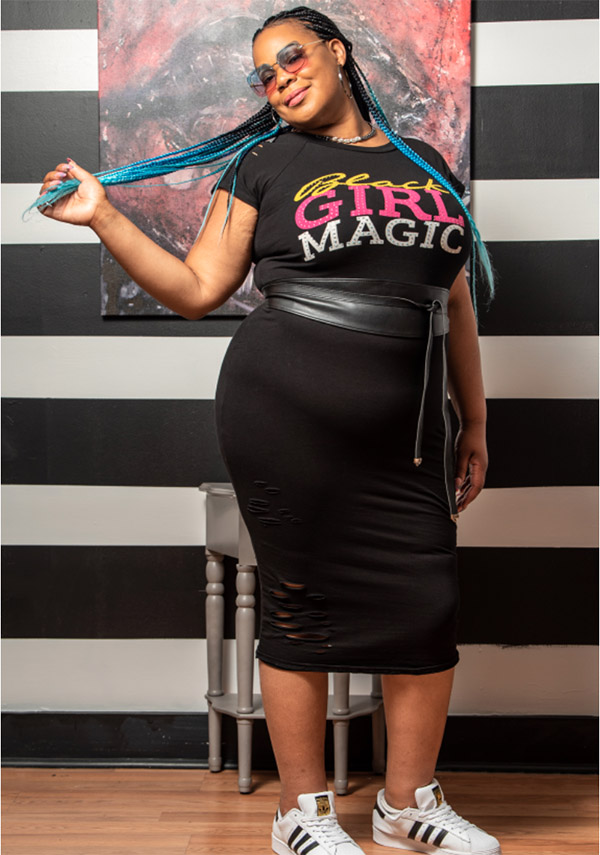 It was a night that could hardly be described.

Words like, “epic,” “amazing” and “successful” came to Ebone Turner’s mind, but it was the look in her eyes that really told the story.

Models strutted down the grand double staircase to the beat the DJ spun. They struck a pose and cameras flashed. The room in the National Civil War Museum in 2018 was packed, sold out to be exact.

After the last model walked, stylists Turner and Tia Wise reluctantly made their way out from behind the scenes to face the cheering crowd. This was their show—they did it.

“We thought, if we could do this on our first project, imagine what we could do,” Wise said.

In March, the pair opened their own retail shop along with fellow clothing brand owners and stylists Anthony Dailey, Donald Hill and DJ Turner. They named it after what they knew they were building—Fashion Empire.

But their store on Front Street in Steelton is really just a window into an “underground” world—one that, if you’re not a part of, you may not notice.

“It’s a community. It is its own world,” Turner said. “I feel like together we could take over this city.”

After leaving their desk jobs to pursue their passion, Turner and Wise started their own clothing brands with a goal of inspiring confidence.

Wise’s line is half professional and half street-style, all with a little edge. However, she explained the difficulty of finding clothing that isn’t oversexualized.

“There’s a shortage of plus-size in this area,” she said.

Turner also started her own brand, “Fashion Over Foolishness,” in 2014, but what she really loves is making people “look good.”

“A lot of people don’t think they need a stylist until they get one,” she said.

Turner puts together outfits for people to wear during photoshoots, fashion shows or any other big events. She often works with Dailey, a fellow stylist and one of the co-owners of Fashion Empire. The duo forms “Street Couture,” Dailey bringing the fancy and Turner with the edge.

“It’s a confidence thing,” she said. “We just want people to feel good. I want to help their self-esteem.”

While styling, Turner has witnessed clients cry, so happy with how they look.

Dailey’s life has always revolved around fashion. His great grandmother hosted fashion shows, his grandma always had an event to dress up for and his uncle James—he was Dailey’s fashion icon.

“I’ve always loved getting dressed up and looking nice,” he said. “I was the 5-year-old that wore a suit to school.”

When Dailey started his brand, “Anthony James,” and began styling with Turner, it just made sense. Fashion was his world.

When most people think of fashion epicenters, Harrisburg probably isn’t the first place to come to mind—Los Angeles or New York maybe, not Harrisburg.

“It’s a smaller city, and it definitely gets overlooked,” Dailey said.

But once you meet one member of the fashion world, the rest starts unraveling.

There’s Maisha Webb of Mean Girl Style Boutique who knows the Fashion Empire team down the street. Wise and Turner namedrop Keya Wilson, who, according to them, is the most well known designer in Harrisburg. Then there’s Tracy Johnson and Jennifer Ruiz, who are current vendors at Fashion Empire. And you can’t forget Dimitra Diggs of Urban Snob in Midtown.

“In this city, you really have to prove yourself,” Turner said. “We are not allowing people to walk past us.”

Ultimately, she doesn’t see the local fashion scene as a competition.

“It’s like that Ne-Yo song, ‘I’m a movement by myself but I’m a force when we’re together,’” Turner said. “I want people from Philly to be like, we need to get down there.”