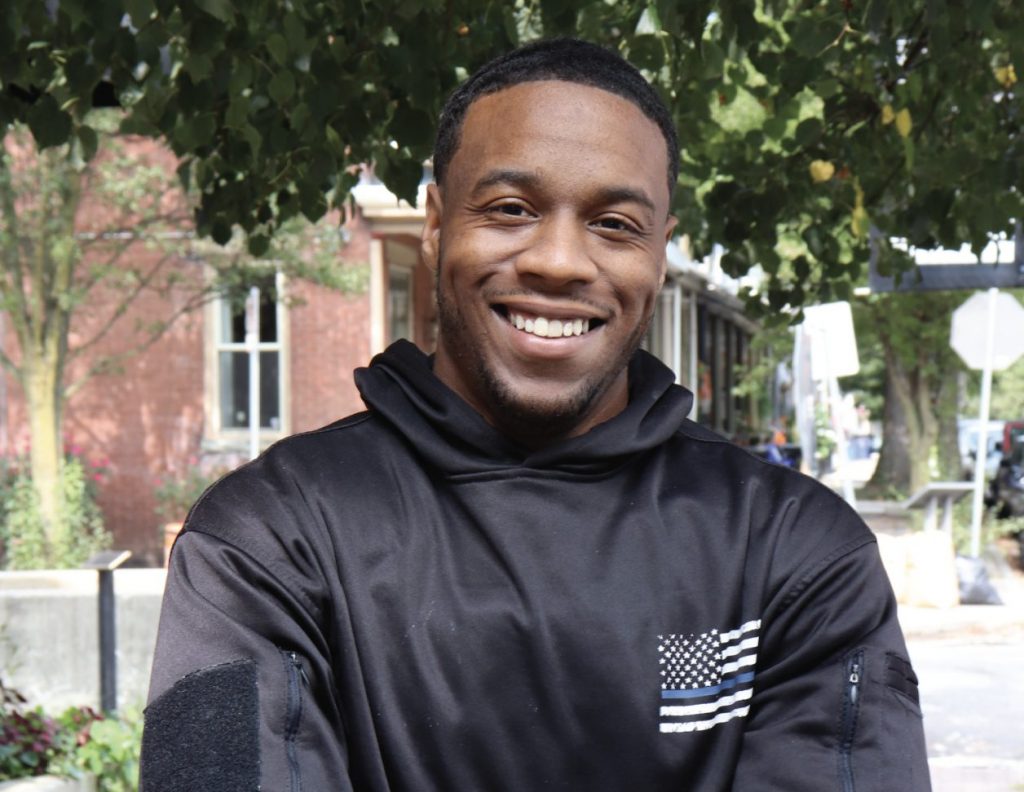 As a high school student at Bishop McDevitt in Harrisburg, Anderson played football, basketball and track and field. In 2009, his track team won the school’s first championship for the sport. Also that year, the football team came out on top as the Mid Penn champions.

He went on to play football at Lock Haven University and was even an NFL prospect, he said.

Anderson started sports when he was young. His mom signed him up to help him stay out of trouble.

When he was 9 years old, a teacher caught him with a pocketknife he found on the ground. The school had just switched to a “zero tolerance” policy. He was in trouble.

“I’ve never been a trouble-maker; I’ve been a kid,” he said. “As a little kid, I had already been going through the juvenile system.”

Growing up in the city, Anderson remembers other encounters with the police.

“I would always resent experiences that I had—run-ins with the police,” he said. “I could’ve easily been someone that had a dislike for law enforcement.”

Back in his football days, Anderson faced his opponents head-on, clashing, tackling, outrunning. But with the police, it was different.

There was a clash, but he decided not to run.

“I always told myself—rather than run away from my fear, why don’t I do something about it?” he said.

Anderson is now enrolled in the Police Academy at HACC. His goal is to graduate and serve as an officer in Harrisburg’s Bureau of Police.

Anderson didn’t always see himself as a police officer, mainly because most officers he encountered didn’t look like him.

He wanted to be an athlete, and there were plenty of role models in that realm. One of his influencers was Chris “Handles” Franklin of the Harlem Globetrotters, who mentored him through basketball.

As Anderson grew older, he began to see people of color, like Harrisburg Commissioner Thomas Carter, in law enforcement positions.

He took a position with the Dauphin County sheriff’s office, and it was that job that led him to a career in law enforcement.

Later, he began working as a constable alongside his friend Hanif Johnson, now a magisterial district judge in Harrisburg.

“We both had a passion for sports, and we used that to get a college education,” Johnson said. “Watching him become a member of law enforcement has been very interesting.”

Now, Anderson is training part-time to become a police officer, while continuing to work as a constable.

In his class, he said, he is the only African American.

Anderson believes that he brings a perspective, unique from those of his classmates, to the academy, as a Black man from the inner city who has had negative experiences with the police.

“I always remind my classmates and try to be open with them about how I grew up,” he said. “I know what it’s like to sit in the back of a cop car.”

Anderson often goes to Harrisburg schools to talk with kids. He gets their attention with some basketball tricks and then tells them about his story.

He wants to be a role model for kids who are growing up just like he did. To Anderson, representation matters.

“Once I started to see people that look like me in these positions, it made me want to do it,” he said. “I want these kids to know there is someone out there who cares about them.”

Anderson still spends a lot of time out on the field. He is often playing flag football with kids or volunteering with the Holy Name Jets or the Central Penn Crusaders youth football teams. Sometimes, he and Johnson coach together.

“If you made it out of a hard situation and bettered yourself, you should share that blueprint,” Johnson said.

He gets up each morning at 4:45 a.m. to work out at the gym. Then he goes to get his kids ready for school. At 8 a.m., he goes to work as a constable and, afterwards, studies at the police academy until 10 p.m.

But he’s used to hard work.

“I’ve always had to climb up in order to get things,” he said.

Even though Anderson understands the risk that comes with being a police officer, it’s not putting on the uniform that scares him—it’s taking it off.

“I don’t get to wear this uniform all day,” he said, recalling the times he felt profiled or criminalized. “I should be able to look the way I look and talk the way I talk and still be a professional.”

Anderson hopes that becoming an officer will inspire other Black police recruits.

“In order to get young African American males, we have to decorate our police force,” he said. “I wish there was a more diverse police force.”

Anderson is especially passionate about serving his hometown, Harrisburg. He said he wants to follow in the footsteps of one of his heroes—Commissioner Carter.

Anderson learned a lot during his days as an athlete: hard work, stamina, determination. There’s a lot he can take from the field into being in law enforcement. But the clashing of teams, the polarization—that’s what he wants to avoid.

He remembers what it felt like to be that 9-year-old caught with a knife he had picked up off the ground. He knows the feeling of riding in the cop car.

As a member of law enforcement, Anderson plans to operate on the basis of love, respect and the understanding he has from being on the other side of the law.

“I could literally take someone to jail, and it’ll be all love at the end of the day,” he said.