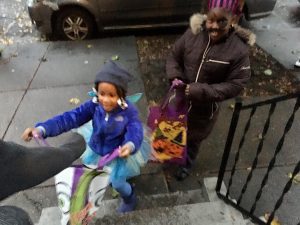 Children gather candy at a past trick-or-treat in Olde Uptown in Harrisburg.

Harrisburg neighborhoods may look more like a ghost town come trick-or-treat night in the city.

Mayor Eric Papenfuse announced on Friday that, to comply with U.S. Centers for Disease Control (CDC) guidelines, there will not be traditional trick-or-treating sanctioned by the city. Instead, locations throughout Harrisburg will hand out grab-and-go bags of candy.

“There will still be an opportunity to come out and get some candy safely,” he said. “Like many things, we are adapting and changing and trying to keep everybody safe.”

Papenfuse said the city is looking for additional locations to include in the candy giveaways.