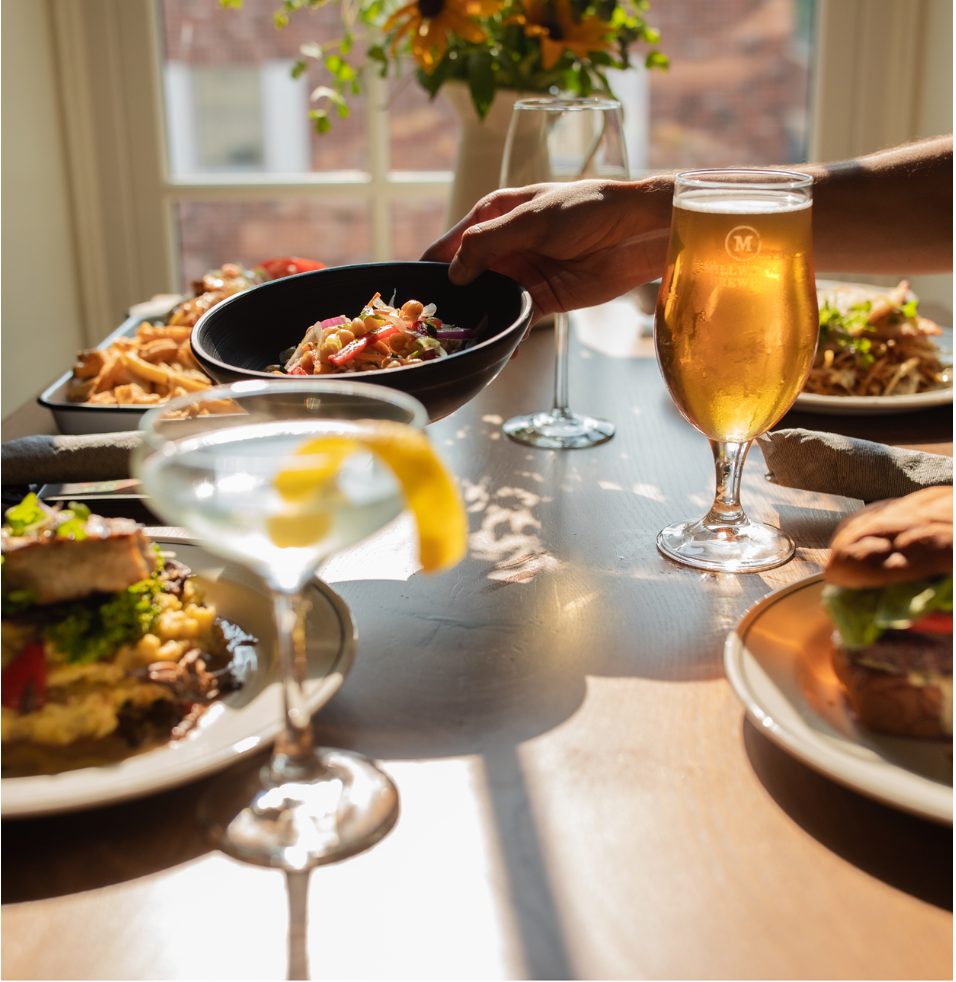 Scottish Poet Robert Burns once said, “The best-laid schemes of mice and men oft go awry.” It’s a phrase to which Josh Kesler can certainly relate.

Before opening the Millworks in Harrisburg, Kesler dealt with the vicissitudes of real estate. So, suffering the occasional setback was hardly a foreign concept to him.

But then came COVID-19, a wholly new challenge that hit the restaurant industry hard. Nonetheless, he continued to charge forward with plans to open a new restaurant in the heart of Camp Hill—The Watershed Pub. Kesler went so far as to put a sign out announcing a July 16 opening date.

But then the pandemic struck too close to home. An employee at the just-reopened Millworks tested positive, causing him to test all employees for the virus. When he discovered that he would have to wait two to three weeks for the results, he decided that it was time to pivot again. So, he put both restaurants on pause.

“I wanted to gain a little bit more of a comfort level,” Kesler said.

By the first week of October, the restaurateur was once again ready to host the grand opening of the Watershed Pub.

Kesler has long had a passion for preservation, rehabbing over a million square feet of historic properties over the years. So, when he heard that Creative Elegance Boutique was up for sale and that the building dated back to the 1800s, his interest was piqued. He made an offer, closed the deal, and got to work.

Customers will recognize the exterior.

“We worked hard to preserve the historic architectural integrity on the outside of the structure,” Kesler said.

Inside, things have changed quite a bit in the 3,500-square-foot building, which now seats 160. The pub features a bar on both the first and second floors, with white oak flooring throughout. Seating on both floors is a combination of tables and booths with lighting fixtures that vary from sconces to Edison bulb pendant lighting to colonial-style chandeliers. Kesler attributes the choice of wall color to his wife, who selected “Cushing Green,” a period hue for the building.

As for the cuisine, sustainability is infused into the heart of the menu.

“The Watershed Pub developed as we began to think about the impact of our region on the Susquehanna River Valley and, ultimately, the Chesapeake watershed,” Kesler said.

Diners have a choice of carefully selected seafood options that are regional, sustainably harvested and meet criteria from the NOAA fisheries guide, the Monterey Bay Aquarium’s Seafood Watch Guide and others. Selections hail largely from the mid-Atlantic region and include oysters, blue crab, mussels, clams, rockfish and even Maryland snapping turtle, along with non-seafood items like vegan ravioli and country fried steak.

Kesler said that he strives to be environmentally responsible.

“It’s important to me to work with the Chesapeake Bay Foundation to help support the organization’s mission to protect and restore the bay,” he said.

The Watershed Pub has something else that Camp Hill residents have longed desired for their downtown ever since they marched to the polls a few years ago to overturn the borough’s “dry” status—a place to get a drink.

The restaurant offers artisan cocktails crafted with Pennsylvania spirits, along with a selection of quality Pennsylvania wines and a wide selection of brews from the Millworks Brewery, with brew master Jeff Musselman at the helm.

“My passion for brewing is anchored in the fact that what we do is truly a combination of science and art, and there aren’t many careers where you get to combine those two things and make a product that customers are passionate about,” he said.

“Camp Hill is super excited to welcome the Watershed Pub to the downtown business corridor,” she said. “It’s the first dining destination in Camp Hill since Prohibition to serve wine, spirits and beer, all locally sourced from PA.”

Unfortunately, the pandemic continues to hang like a specter in the air these days, especially for restaurants. So, Kesler took an action that he may not have considered a few years ago.

“I decided to install more sophisticated equipment in this restaurant,” said Kesler about the HVAC system that includes a UV purifier that kills up to 98.5 percent of airborne pathogens. “I started out with HEPA filters and began talking to contractors, who led me down the road to discovering this other system.”

It was expensive, he said, but worth the added “peace of mind.”

Otherwise, he’s happy to be contributing to downtown Camp Hill’s fabric, adding a food and drink option to the revitalized shopping district, and is optimistic about the changes being made to make the small community more walkable.

“When the weather warms again, we will also be able to accommodate an additional 90 customers who enjoy outside dining,” he said.

The restaurateur said that his family lived in Camp Hill for almost a decade.

“So, for me, it feels almost like a homecoming,” he said.

The Watershed Pub is located at 2129 Market St., Camp Hill. For more information, visit
www.thewatershed.pub or their Facebook page.