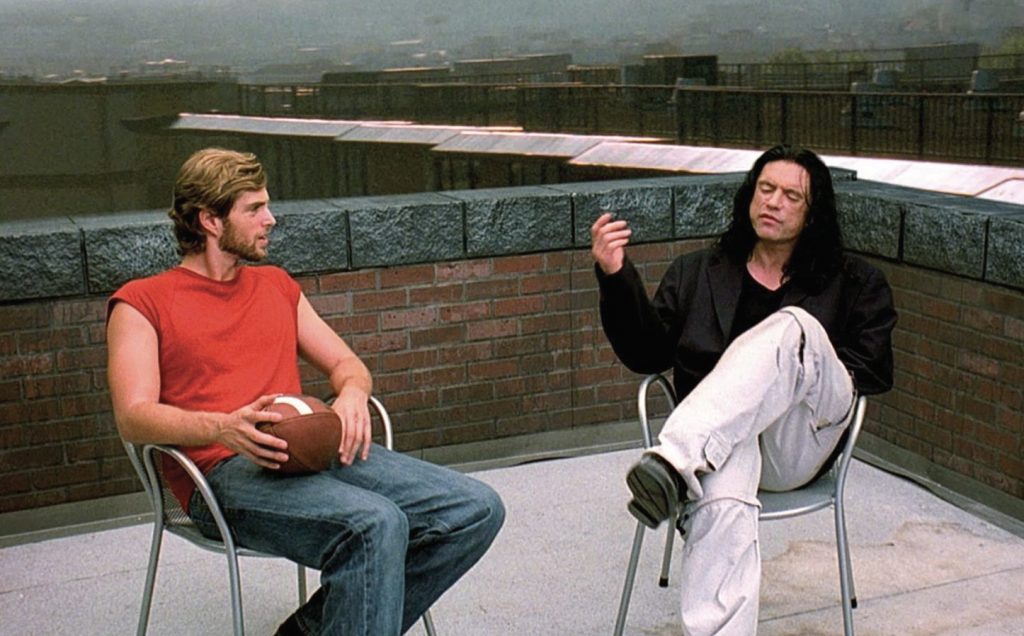 What kind of impression do really bad movies have on our lives?

Some of us would probably say that they don’t impact us much at all. They filter in and out of the subconscious, and we turn our attentions to bigger and better things. But then, some of us haven’t seen “The Room.”

Produced in 2003, “The Room” has been touted across the board as the worst film ever made. With Tommy Wiseau at the helm as writer, director and leading man, the film follows (or tries to follow) a story of seduction and betrayal. Wiseau plays Johnny, a man whose life is upturned when he learns his fiance, Lisa (Juliette Danielle) is sleeping with his best friend, Mark (Greg Sestero). Complete with drama, drug busts, violent encounters and an overindulgent amount of sex scenes, the film tries its best to pass the threshold of good, but never makes it. It’s a perfect storm of bad acting, bad dialogue, plot holes and too many scenes where men pass a football.

And yet, audiences around the world have fallen in love with the off-kilter, accidental charm of this Hollywood disaster. In its 19th year of existence, “The Room” still has regularly scheduled screenings, even on a monthly basis at some cinemas. While it is universally known as a bad movie, it is also universally beloved.

As for its cast and crew, at least one person appreciates “The Room” for its bizarre impact. Greg Sestero, who played Mark, has said he’s come to appreciate the film for what it was and for its loyal audience. Since he wrote his first screenplay at 12 years old, Sestero had the filmmaking bug. As an adult, he jumped into the acting game and almost immediately scored a leading role in “Retro Puppet Master” due to his ability to speak in a French accent. The producers had struggled to find someone who could do a French accent and were settling for British, until Sestero auditioned.

“French was my first language,” he said. “And I walked in and said, ‘I can’t do British but I can do French,’ and they were like, ‘That’s actually what we need!”

After such a kismet audition, Sestero noted that new actors are always so hopeful for their first role, but “obviously we learn very quickly, usually [they] aren’t very spectacular. But I had a lot of fun.”

“I was kind of bored in a lot of these acting classes because everyone is very serious and focused on making sure they’re Laurence Olivier right off the bat,” he said. “But when you watch somebody go up who is so unique and chaotic in a way that’s entertaining… I found myself looking forward to going to class. So, I followed that intrigue and befriended this character.”

When Wiseau asked him to act for a film he was making, Sestero agreed. And the rest was history. It was a film that most of the cast and crew assumed would never see the light of day, and yet…

News spread of this gloriously bad movie. It somehow caught fire and began attracting crowds who wanted to see the hype for themselves. That is exactly what made it so popular—it transformed from a film into an event, a night to laugh and poke and commiserate with other viewers.

Several years into this strange infamy, Sestero took his experience on the set of “The Room” and wrote the book, “The Disaster Artist,” with the hope of adapting it as a film.

“At the time, people were like, uh oh, sounds as delusional as Tommy,” he recalled. “[But] three weeks after the book came out, I got a call from James Franco and Seth Rogen, and I couldn’t believe it. I was like, wait a minute. You can dream big and work hard, and sometimes it pays off.”

Fueled by that experience, Sestero continued his filmmaking career, writing and co-starring in “Best F(r)iends” with Tommy Wiseau in 2018 and helming “Miracle Valley,” which was released in 2021. He is trying new things. Miracle Valley is a horror flick, and now he’s in development for a film about UFOs.

“To continue to enjoy creating and surprising your audience is something I’ve been very fortunate to do and hope to continue to do,” he said.

It is amazing how much a bad movie has affected Sestero’s life. Bizarrely enough, what would have normally tanked someone’s career has opened up countless possibilities for him. And the same can be said for audiences of “The Room.”

“A lot of people come to screenings and talk about how they used ‘The Room’ at their wedding, or it introduced them to their significant other,” Sestero said. “It’s made people friends.”

There can be no denying that this happy trainwreck of a film holds a special place in our hearts and in Sestero’s heart, too.

“‘The Room’ is always gonna be something that people are drawn to and love,” he said. “I’ve come to appreciate it… It is what it is, and I think that’s great, and I just continue to do what I’ve always liked to do and tell stories.”

For those who don’t know the hype, Greg Sestero will be coming to Harrisburg for a screening of “The Room” and special Q&A on Jan. 23. There has never been a better time to be impacted by a bad movie.

Down in Front! improv riffing

3rd in the Burg Movie Night