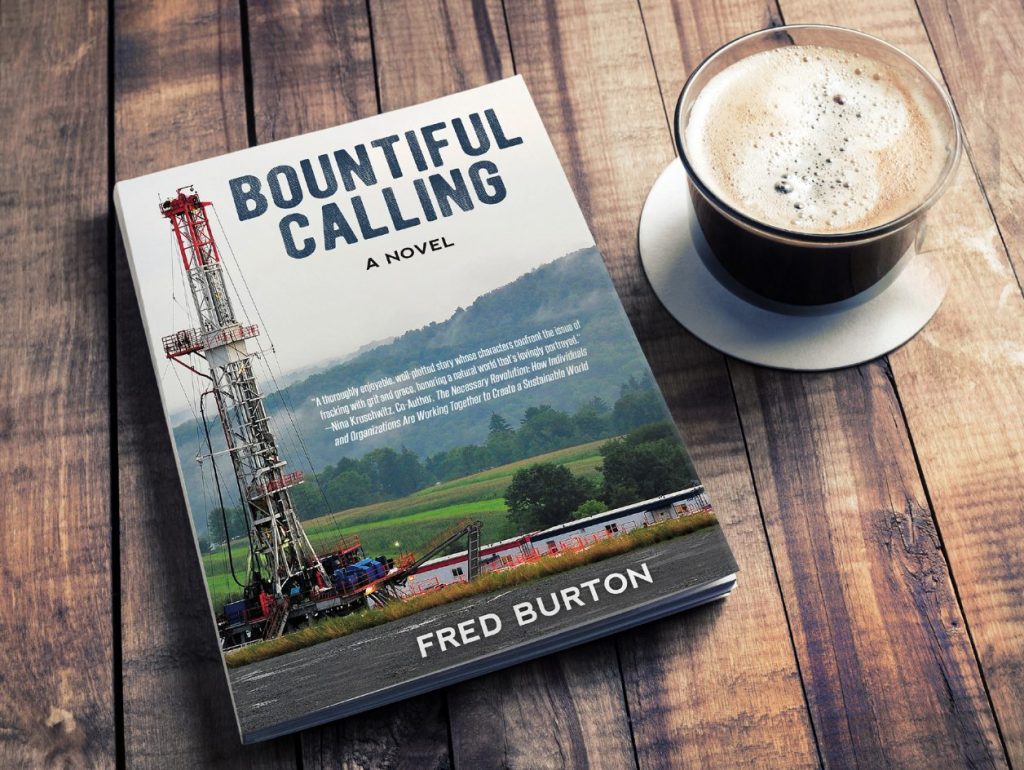 When it comes to the extraction of natural gas from Pennsylvania’s Marcellus Shale territory, novelist Jennifer Haigh got it right when she entitled her 2016 novel on the subject “Heat & Light.”

In the debate over that process—hydraulic fracturing or “fracking”—there’s been plenty of the former and perhaps not enough of the latter.

Local writer Fred Burton has done his best to redress that balance in his second novel, “Bountiful Calling.” Although Burton’s sympathies lie with the opponents of fracking—his novel is dedicated to “all the people in the Marcellus Shale region locked in unfair fights because of fracking.”

It’s a nuanced exploration of the issue, balancing the perspectives of environmentalists, drilling companies and their political advocates, and, above all, ordinary families affected by the process.

Burton, a Harrisburg resident, explained that his interest in fracking was sparked by attending several demonstrations in the city opposing it in the early 2010s.

“I talked with some of the people from the affected areas, and I came to understand why they felt their communities were under siege and they were collateral damage,” he said. “And I really wanted to find some way to give voice to what they were going through.”

Burton’s protagonist, Joe, is an idealistic young legislative assistant to fictional state Sen. Jeff Bain, a Republican representing a district in north-central Pennsylvania. Lingering in the district after attending a contentious constituent meeting, Joe meets Nicole Marshall, whose family owns a lodge and 20 acres of farmland in the vicinity of the Loyalsock State Forest.

As fracking expands nearby, some delighted residents begin cashing sizable royalty checks for leasing their land to drilling companies, while others suffer from the environmental consequences. At the same time, Nicole and her parents discover that the previous owner of their property had retained the mineral rights and leased them to an Oklahoma driller. The planned operation will destroy half the farmland lovingly managed by Nicole’s father, Gabe. It will also inflict incalculable economic damage to their lodge business, as their guests seek out quieter, cleaner places.

These events propel Nicole into environmental activism. She becomes involved with a group called 2 Degrees that engages in acts of civil disobedience—its name an allusion to the temperature rise beyond which “the descent into a hellish environment would be swift and, at some point, unstoppable.”

Joe’s relationship with her turns romantic and becomes even more complicated when he’s asked to serve as the senator’s point man in a bid to land a multi-billion-dollar refinery for converting natural gas to liquid in the district. Along the way, he makes some disturbing discoveries about the integrity of state regulatory officials.

In all of this, Burton skillfully blends fact and fiction, shifting smoothly between the outer and inner lives of his characters. His novel is as much a human story as it is an attempt to illuminate a divisive environmental and economic issue.

He’s also interested in the moral dimensions of his characters’ actions. Both Joe and Nicole take, what he called in a 2020 interview, “very bold risks” at the end of the book, their actions “tied to an increased appreciation of their own humanity and the world in which they live.”

Burton began working on “Bountiful Calling” in 2014 and finished it three years later. He secured a publisher as a result of a pitch at a writer’s fair in Annapolis, Md., and he’s hoping Bancroft Press’s contacts in Los Angeles will increase the chances of a movie version of the book.

A native of Queens, N.Y.—the setting for his first novel, “The Old Songs”—Burton said he has always thought of himself as a writer, but recognized in his 20s that he’d have difficulty making a living at it. So, he spent his working life in the information technology field, before retiring several years ago.

Since then, he’s been writing full-time, devoting at least a couple of hours daily to the pursuit. Unlike writers who meticulously outline their plots, Burton describes himself as someone who simply “writes until I run out of gas.”

“All of a sudden, it starts cohering, and, if you’re really fortunate, it starts placing its demands on you, and you just become a conduit for the action that must happen,” he said.

“Bountiful Calling” was published in March 2020, just as the coronavirus pandemic was closing bookstores and cancelling author events. Burton regrets missing out on the opportunities he would have had to promote his novel in a normal time. With restrictions easing, he’s hoping he’ll have more opportunity to engage directly with readers.

He recently completed a third novel, “Man Made,” set in a dystopian future and inspired by an interview with Elon Musk about his Neurolink Corporation, a company developing implantable brain-machine interfaces. It’s a technology Burton eyes warily, especially when he views it against the “overreach of social media and the ease with which autocratic rulers can gain power.”

But for now, with “Bountiful Calling’s” multihued portrait of a complex issue, Burton wants to help at least some readers emerge from their information siloes to consider opposing perspectives. This shift, he believes, is desperately needed today.

“If I contribute to that in some small way, I’ll feel like I’ve accomplished one of my main goals,” he said.